Yet you still avoided the only question that mattered. Are the people getting compensated for all the stuff they gave Stevie for his map? I know he didn't do it all himself. If you are going to pay people pay the right ones.

that's stevies business not mine, and certainly not yours. like I said if you don't like it then leave, I'm tired of you acting like you're suddenly the community ambassador around here. Especially since you've been so disrespectful for it, should have given you a warning the minute after your first terrible post accusing people of being money hungry fucks.

TheLegitRageTheLegitimateRage
So as for the map, I am EXTREMELY excited to play it. I seen Dalek's first video (avoided the rest for spoilers) and got hyped instantly, then I played Industrial Estate and I gotta hands on of what you were capable of which got me even more eager to play this map. Unfortunately I can't really afford to donate so I'm gonna have to wait

but I understand a Map as audacious as this takes time (and incentive)  to perfect and release to the public as bug free as possible.

Not gonna try and go on for too long here, but as for the paying/"donations"; In this case I don't mind because this map is extremely crazy with features and content so I can let it slide but like others have said, I'd not want it to become the norm. I, like many others got into custom zombies for the endless amounts of community created (free) content that was in some cases better than Treyarc's Maps. I can hardly afford to keep up with CoD's DLC Season and there's only 4 of those a year, with the amount of custom maps being released (even though they'd be cheaper) I wouldn't be able to keep up if I had to pay for almost every map and it would deter me from the community. So yeah that's my opinion, I don't mind the Beta for this map being a closed, monetized system but when it's released officially and the same for any other excellent maps in the future, I'd rather not have to pay for it.

In relation to the map, er..I'll check that bank card tonight.

Well, personally, I prefer Daedric Armor because of the protection it provides...
Wait, this isn't the skyrim forums. Christ, I saw the paid mods and I got all confused. My bad.

'U 'Avin a Giggle der' M8?'
Loading Fucks to give....50%
×
GdayitsVishnu's Groups
GdayitsVishnu's Contact & Social Linksgunitmaynejezzayhayza
i noticed the galvaknuckles in industrial estate were sounding weird/no zap sound from bo2, i hope its fixed for this one

Another step into completion, I've said it before, and I'm going to say it again Stevie, can't wait for this to be officially released.

DB-Zen
Congratulations on the release Stevie. I will donate today and try it out. Still need to install Windows on my new hard-drive but I will definitely get in on it today.

As for the paying a donation... It does not bother me in the slightest considering the fact that, like Requiem, this will be released for free to all so no one is forcing anyone to donate. If you made the map a donor only map permanently then I could see the issue but it's not.

Anyway... congrats again man. You deserve any money you get in from it and anyone who plays the map will surely agree.

This beta is officially sponsored by UGX-Mods - if you have any issues with the installation process please contact us via our help system: https://jira.ugx-mods.com/servicedesk/customer/portal/6

this help desk do we need to create an account on this site to use it ,or is it our ugx login we use. and what is this site  im not sure . i just need to download oilrig files , ive donated and ugx launcher installed but no sign of oil rig download ,help
forget it im officially an idiot i didnt tick the check box install available now
Last Edit: September 02, 2015, 11:29:36 am by greeniezk5

dotexe55
Thanks for the map, just one thing i keep getting script compile error G_Spawn:no free entities on early rounds?

Looks good dude. I'll throw a few pennies your way when my patreon cashes out lol

×
timelordalex's Groups
timelordalex's Contact & Social Links
I'm sure this is a good map, but moneys tight right now, I dont think i can bring myself to pay for a beta version of the map, so i might just wait till the full version comes out. 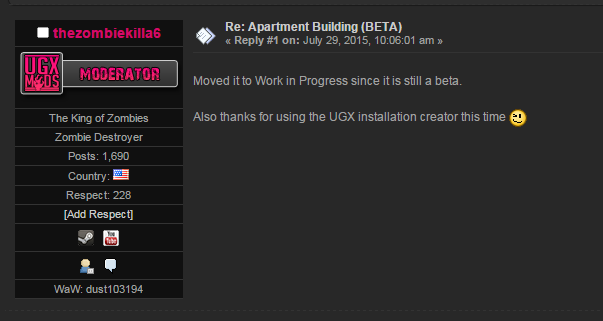