Created 1919 days ago
by MakeCents

If you experience texture glitches or crashes, turn down your texture settings in the options menu.

Back Story
They thought they developed an endless source of safe power from things found floating in space. They created the GRAVITRON, which seemed to emit harmless radiation... or so they thought. After the accidental death on the station they found out different. That worker didn't stay dead... The scientist attempted to lock it up in Sector 9 and escape to earth, but they didn't know they and the entire earth were already infected. Three of the scientist teleported to earth while one stayed back to disable the space station. Little did they know what we know now. We must reverse the GRAVITRON. This should cure the earth and stop the infection from growing.
First power up the teleporters and then go retrieve the keycards from where the scientist teleported and unlock sector 9. We can't access Sector 9 without them. Then reverse the GRAVITRON. It's up to you... 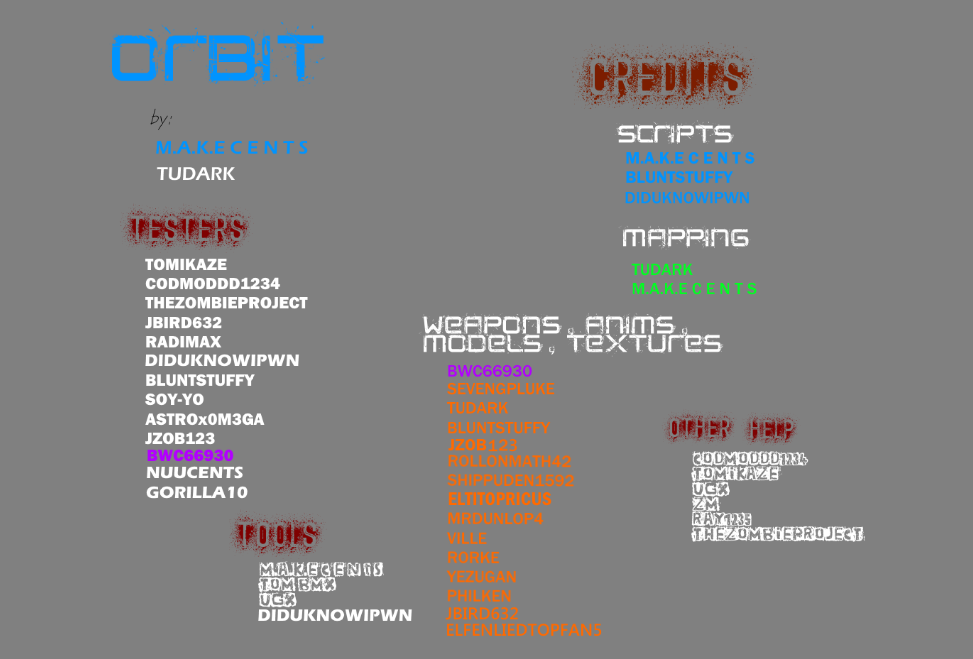 Extra credit:
- My wife: for the voice over's for the station announcer and dealing with me putting so much time into this

The Making Of ORBiT
This is Tudark's, and my, 2nd map each, and our first map together. We set out with many goals, we feel we almost reached, and have learned a lot. We hope you enjoy ORBiT with limited bugs. To get the full affect of ORBiT you should play it more than once since many things change everytime you play.

Known Bugs
Sorry but you are not allowed to view spoiler contents.

CAUTION
- Some fx don't play when you first load the map, so it is always best to restart it once all players are loaded. Restart ORBiT just for fun to see all the different places you can spawn in!
- If using t4m, don't play on the highest settings, texture bugs could happen.
- If game is crashing, and you have turned down settings, try turning off spec maps and playing in windowed mode
- Still crashing on gun game for some people, even though I tested 3 player on it, so I am not sure why

THANKS
Thank you to everyone involved for helping us get through this! Its a lot of fun to start a map but finishing them is another story. This one would have been next to impossible without so many people helping! Special thanks to everyone that reported bugs and recorded game play.
Last Edit: July 02, 2016, 01:49:47 am by MakeCents

Rich_GamingRichGaming1
Been waiting for this one for a while. Thanks for the release!

Pizza that is all.
There's no better feeling in the world than a warm pizza box on your lap.
×
SoulTaker's Groups
SoulTaker's Contact & Social Links
Damn been waiting for this, can't wait to give it a try thanks man you and all the others who made this map possible !

Zombiejelly
Looks like a cool map and cant wait to try this out!

Why would we expect anything else from him?

Awesome to see it finally released.

Action is the enemy of thought ×
tudark's Groups
tudark's Contact & Social Linkstudark71The Morgue
I hope you guys and girls enjoy this map ,we have had some big headaches with this map. Good luck escaping orbit lol

Are you running in fullscreen? Have you tried windowed? I was playing coop last night on a laptop and my pc, and my laptop isn't horrible, but its not great, and it didn't have any problems, other than typical COD issues. But I notice on the laptop it has less issues if in windowed. I added an option to the main menu because of that.

If no one can play it in full screen, then I know what the issue is, and I'll re-upload the dl tonight after testing it.

cadurling
Keeps crashing playing coop lan game.  As the host the game loaded and I was able to select the game options and launch the game but the other player was stuck on the load screen.  Played single player the game crashed twice before loading correctly.  Anyways cool map, thanks for your hard work.
1
2 3 ... 15 ❱