Created 1116 days ago
by losangeles26 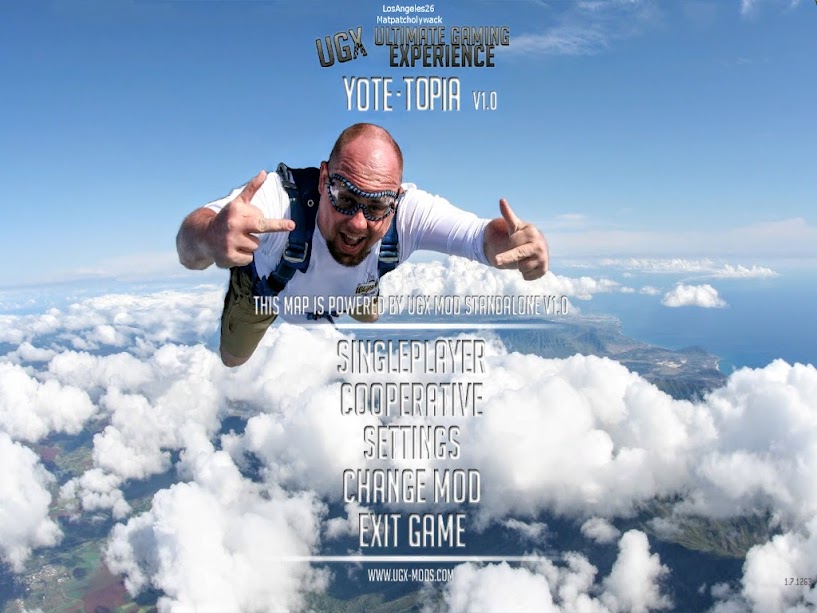 Town Views from Above (on the catwalks) 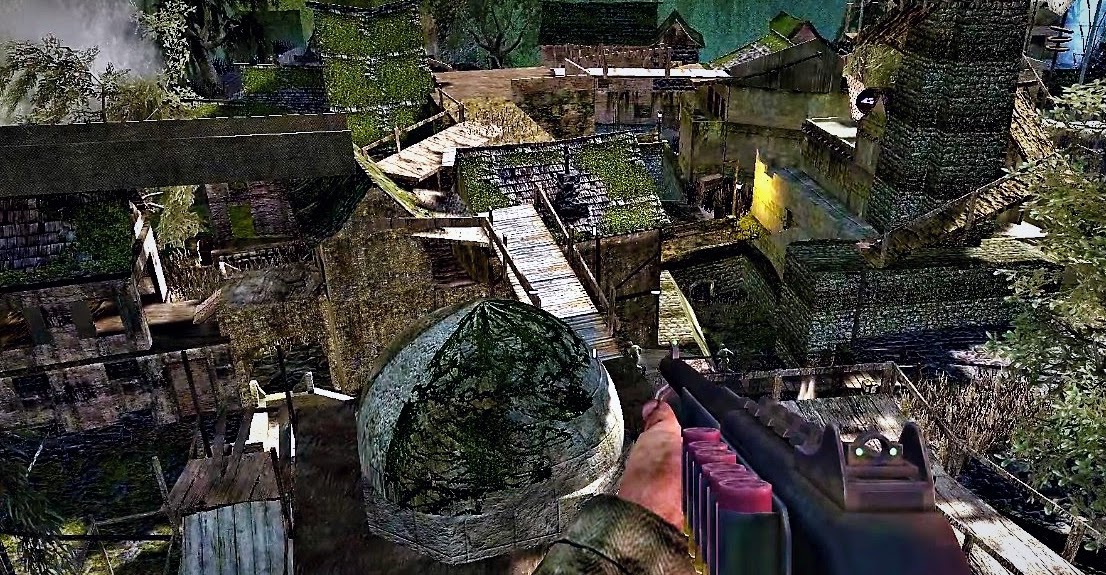 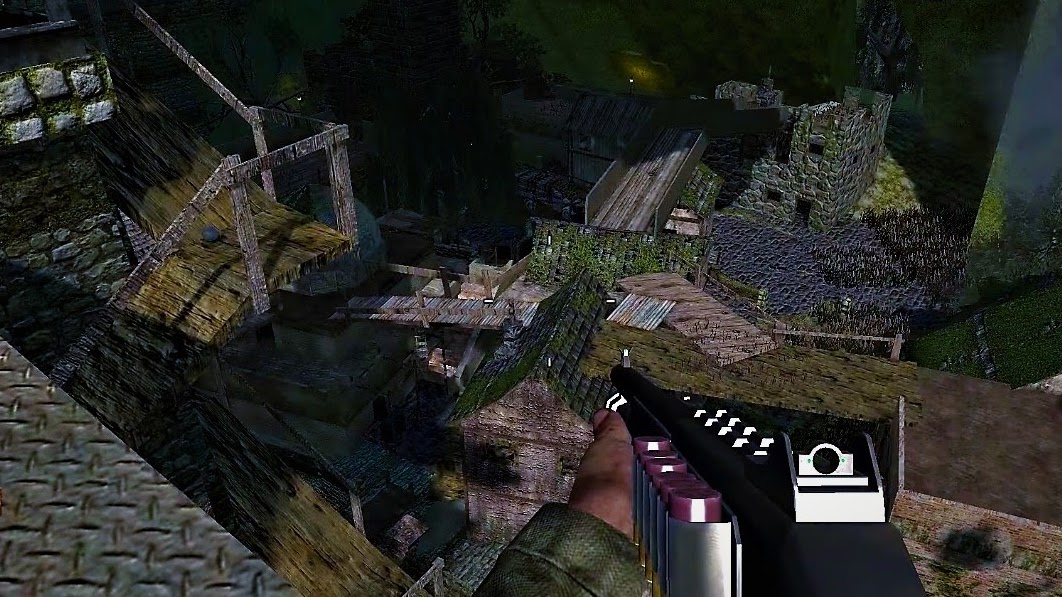 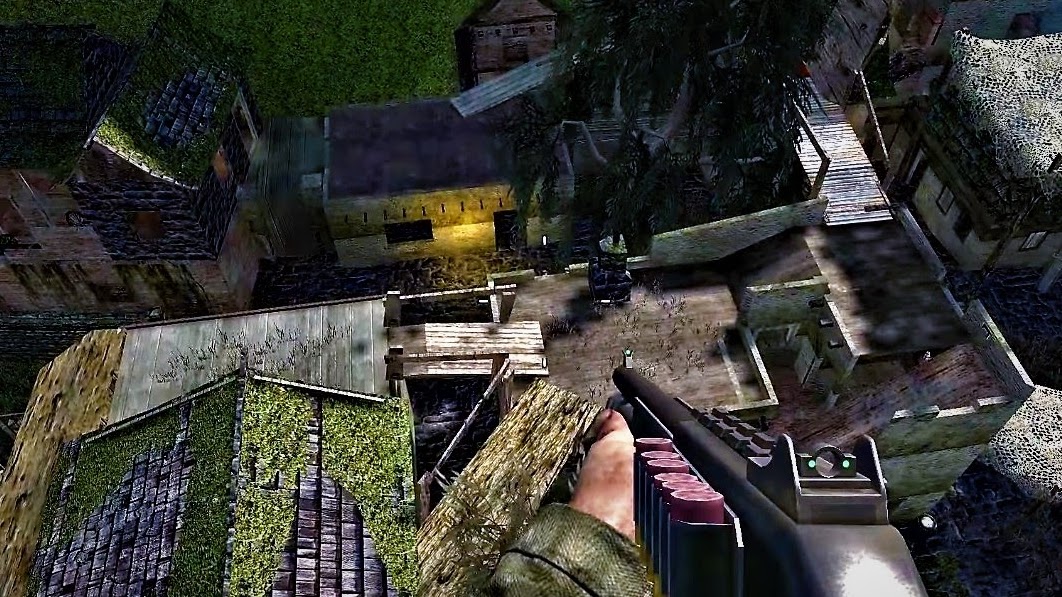 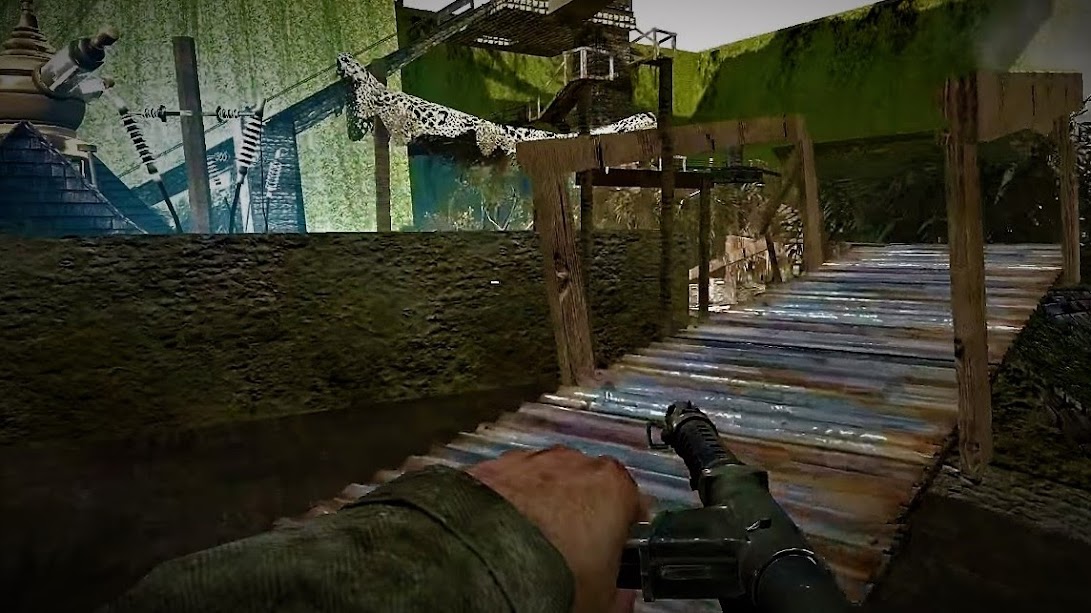 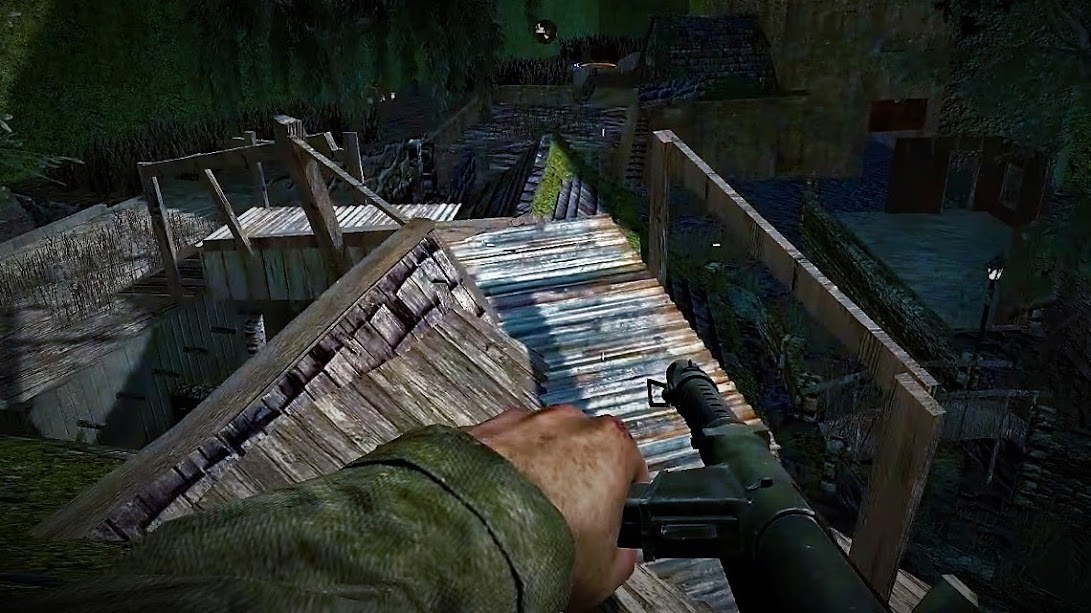 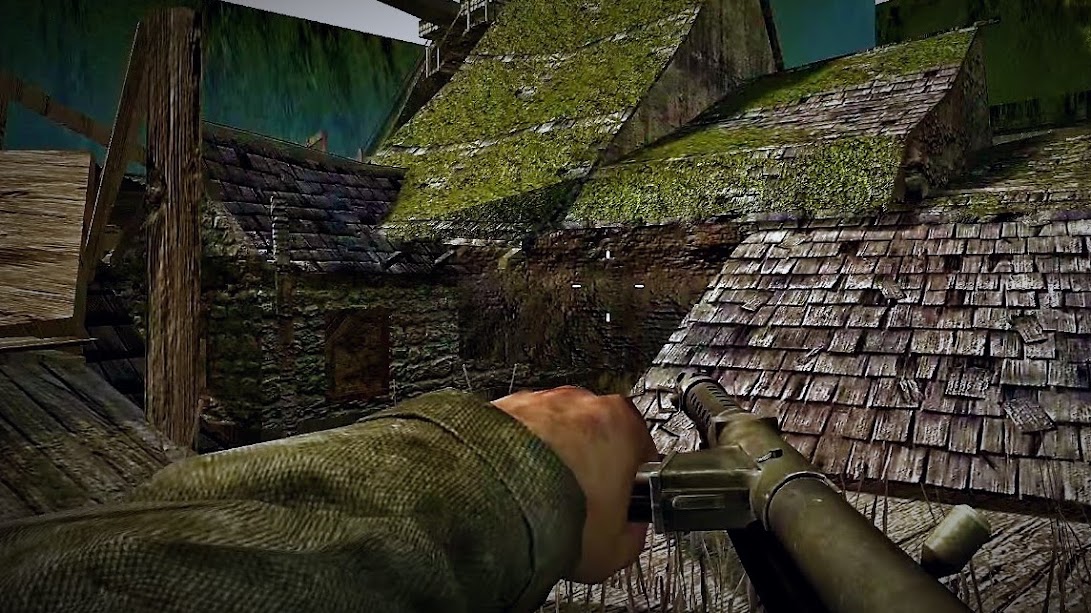 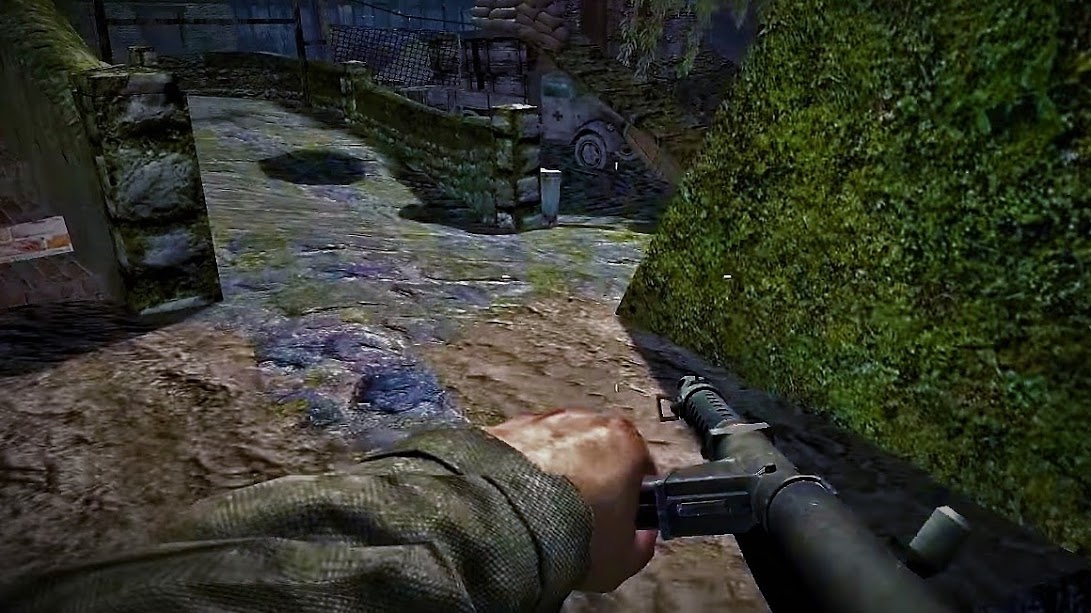 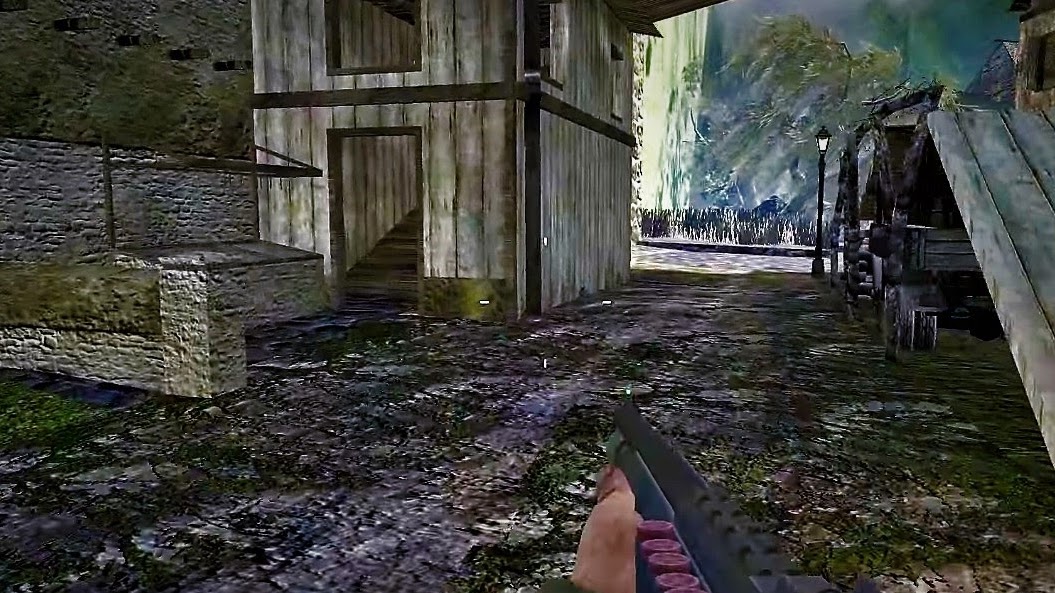 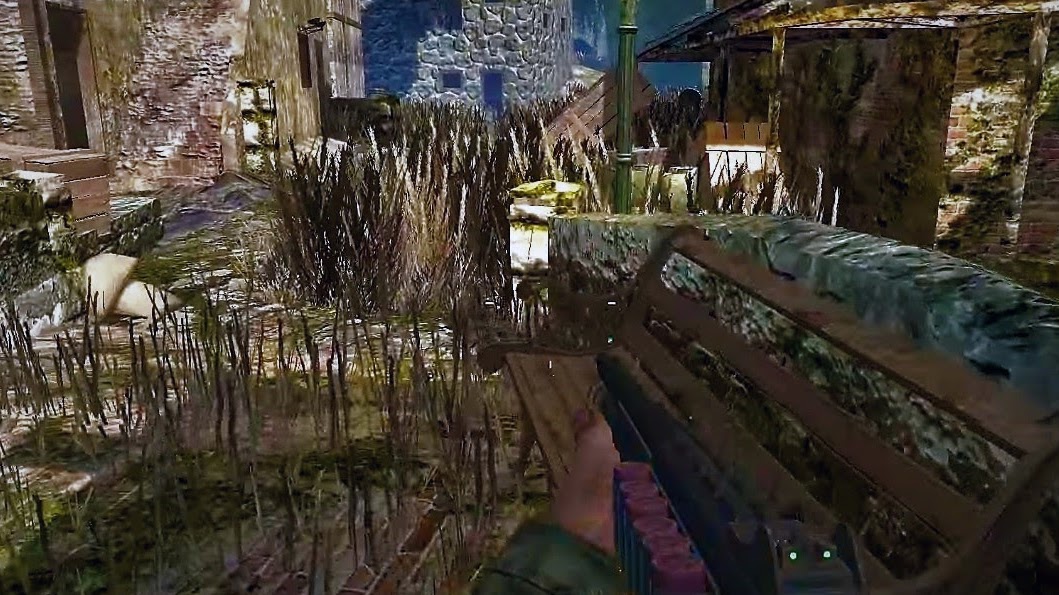 Along the Drainage Ditch 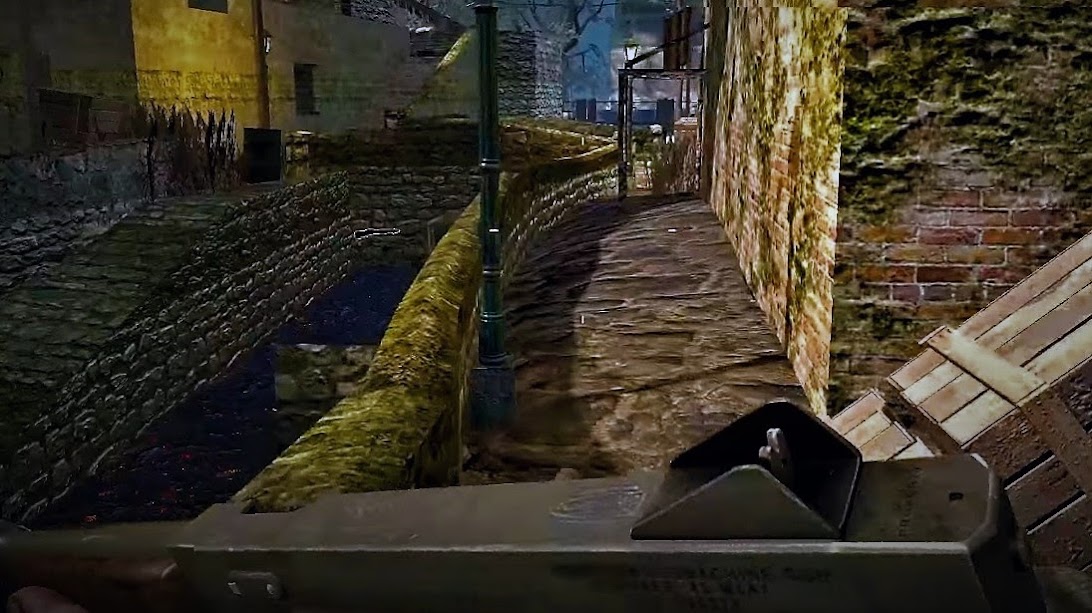 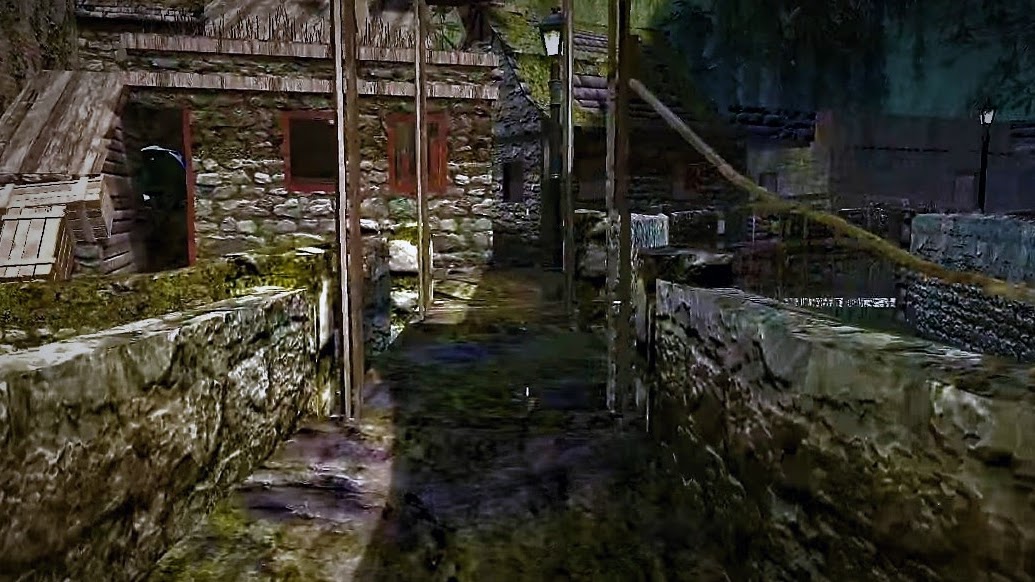 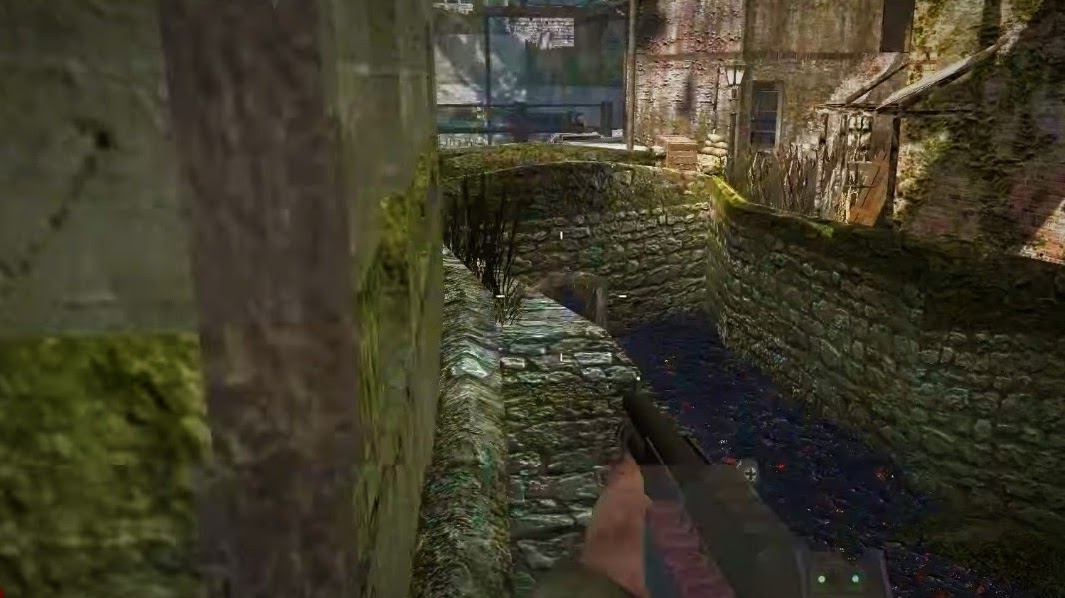 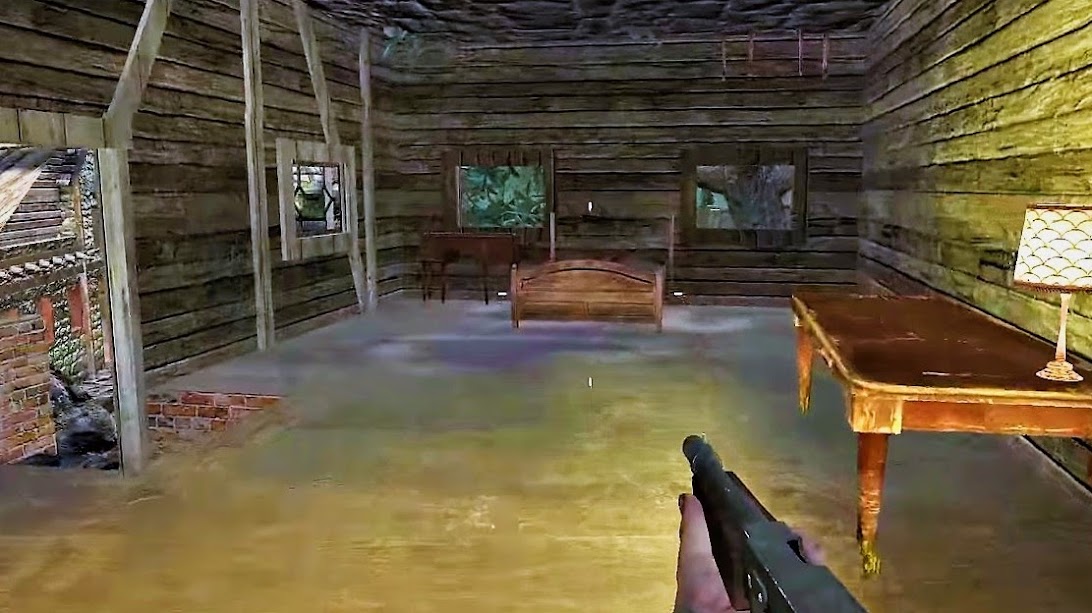 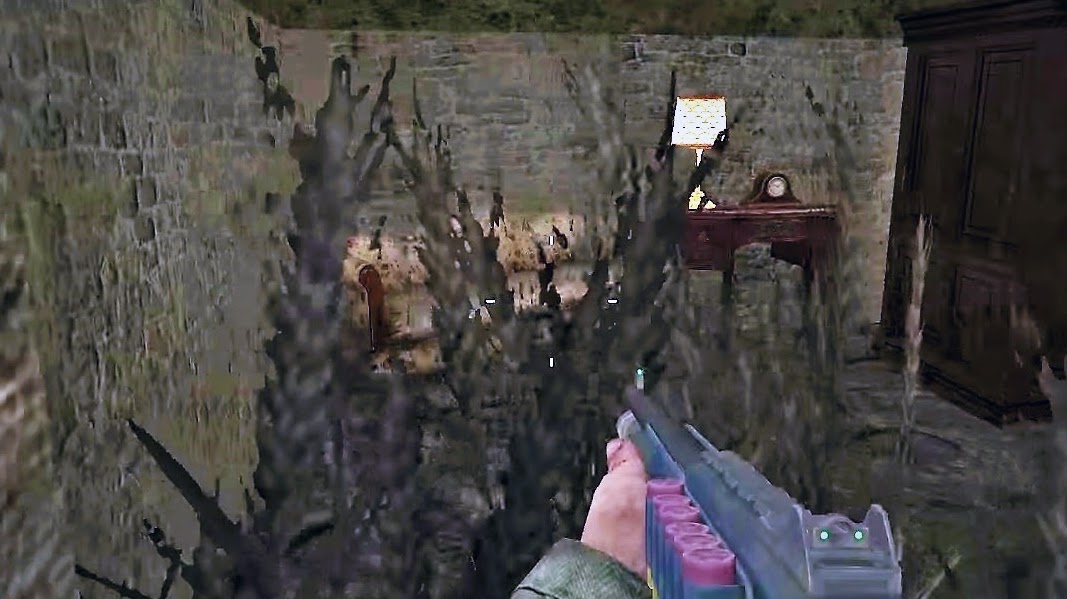 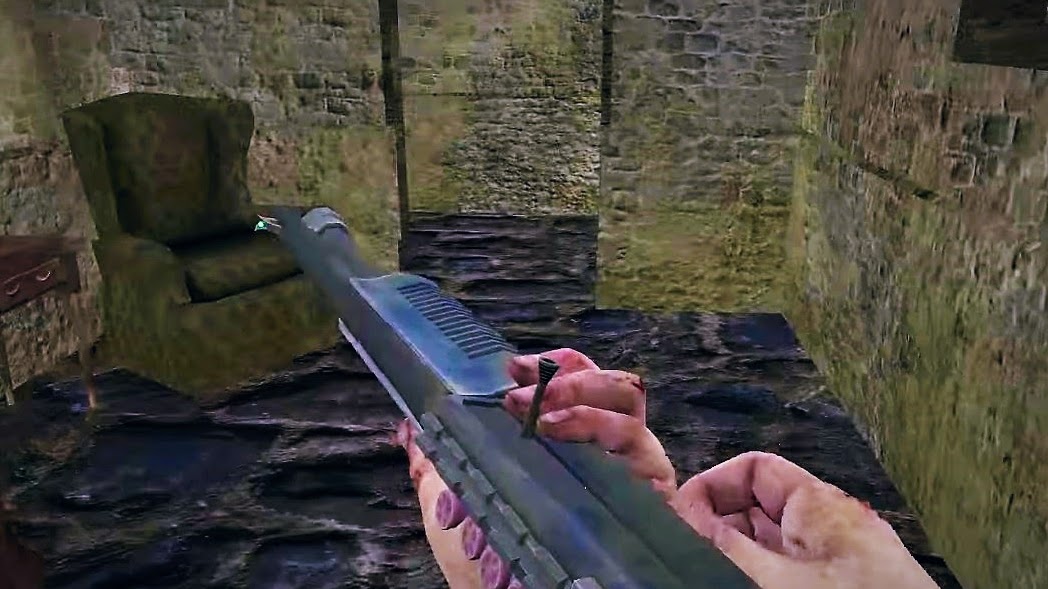 This is a map to remember Yoteslaya.  It is a huge map.  It uses the UGX Mod and is not too difficult, so anyone can play it and just have fun.  It has no doors to buy.  It does have a buyable ending.  Basically you do some random stuff and kill some zombies with a Non-Player Character Yote as he is a buyable powerup in the game.
Five things we wanted the map to have:  (1) Open World Feel - where you can go anywhere on the map (2) Fun/Easy Map - that is not too hard so anyone can play it, (3) Objective Based Ending - that is not reliant upon acquiring money but completing a few self explanatory objectives (4) Overpowered Easter Egg - that is pretty easy to figure out (5) Random Spawn Items - so the map is different everytime and people want to play it over again - keep it from getting boring too quickly.

Strategy to Defeat This Map

To defeat this map on single player "Classic" or "Arcade" mode do the following:  First, purchase a generic weapon better than your start weapon.  Then purchase quick revive to save you if you get downed.

Samantha will follow you up there.  Keep her up there by dodging back and forth as the auto turrets pelt her for about 45 seconds.  A good round of this should give each player plenty of money to do whatever they need - maybe $10,000 to $20,000.

Then turn on the power, find Jugg and a better weapon.

Next, find YoteSlaya and buy his help.  The price seems steep at $4000.  However, when he leaves after helping you kill the zombies for a few minutes he puts some money in the bank.  It is actually a lottery and he puts between $1,000 and $10,000 back in the bank.  Just keep buying Yote's help and Auto Turrets on the tower until Samantha is killed.  Some Notes: there is a delay of a minute or two from the time that Yote and Auto Turrets stop attacking and you being able to purchase them again as they are powerups and must recharge.  Also note that Yote will not kill the last zombie in each round just in case you want to make it a crawler and you can turn off his dialog if it gets annoying by looking at the picture of YoteSlaya and PredictableNova.

Anyhow, once you kill Samantha the zombies will no longer teleport and you can take a breather from constantly running around.
This may be a good time to pack-a-punch a weapon which is located in the sky.  To get there you have to do some Super Mario Brothers style jumping.  However, before you do this, make sure you have Jugg.  With Jugg you can fall from any height and not die as long as you don't get hit by a zombie before falling. 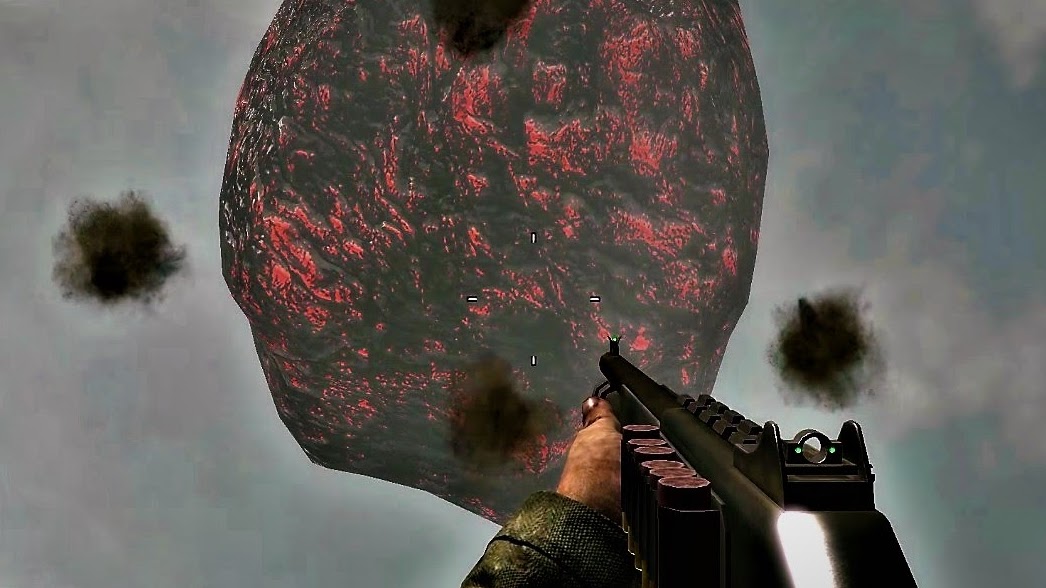 Once the meteor is destroyed, head directly below the meteor as a door will have opened up with the perk called Detonation Dash Fizz.  It is a modified PHD Flopper.  It allows you to leap out great distances when you do the (Run, Crouch, Jump Action) in the air to pick up the Orbs that seem too far out of reach.  And you also make an overpowered explosion when you hit the ground to kill any zombies around you.  To get the floating Orbs requires a skilled jump, like shooting a ball in a basket because your jump with Detonation Dash Fizz is more like a teleport.  If you jump too far, you'll go through the Orb.  If it is at just the right distance, that you will pick up the Orb.  The distance of the jump is always the same so you must modify where you jump from.  Find all 50 Orbs and you can leave on the boat (buyable ending).  The Orbs are found all throughout the town in the buildings and floating in the air.  And each game the Orbs appear randomly in 50 of 100 potential spots so every game is different. 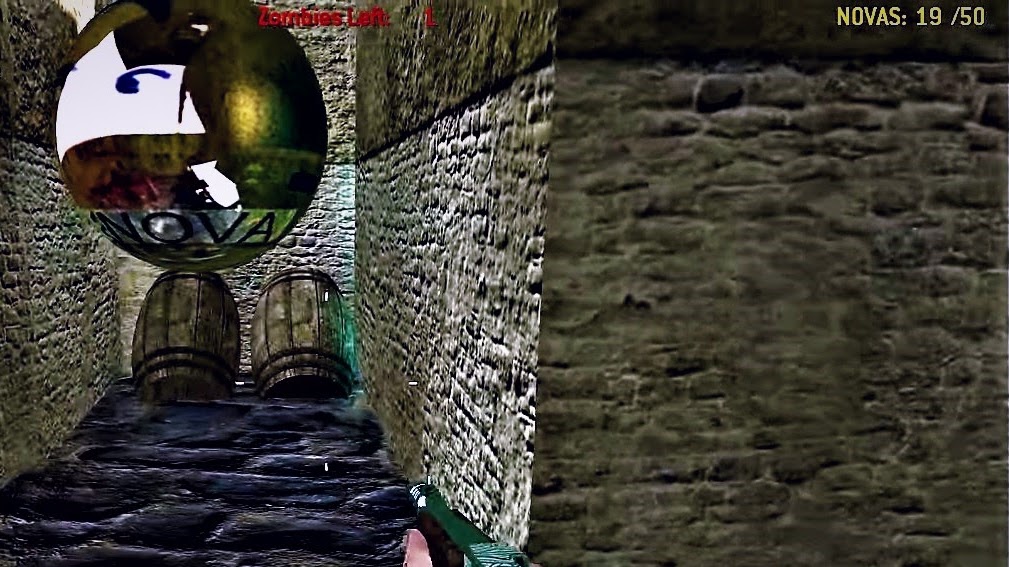 Find all 50 Orbs then head to the boat dock and purchase the boat to leave the island.

Completing the Overpowered Easter Egg in this map opens up the room with Yote's Logo on it.  In it you will find two modified perk machines.  One is a modified Mule Kick called Blitzkrieg Pop - and it gives you all of the weapons for the remainder of the game.  And when you pack-a-punch a weapon, you are given back your weapon plus the pack-a-punched version of that weapon.  The other is a modified Deadshot Daiquiri called Head Pop - and does just what it says.  No matter where you shoot the zombies, their heads come off.  Although, they may run several steps before dying. 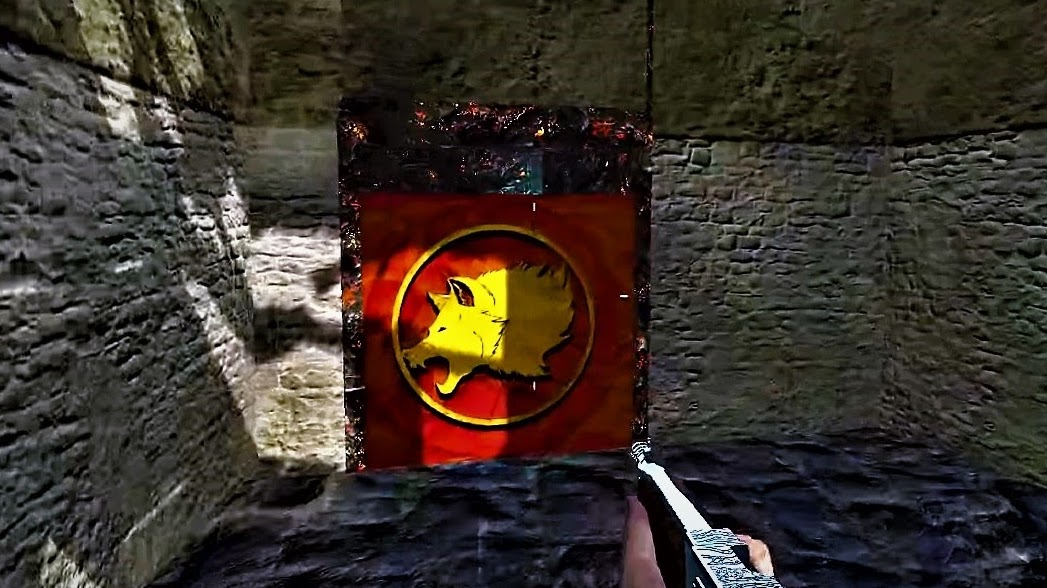 To complete the Easter Egg, you will need a pad and pen.  There are 12 pads with Yote's logo on them throughout the map.  The pads turn on when you destroy the 115 meteor.  11 of them display letters when you shoot them and one of them resets the name you are spelling by shooting the pads.  For each individual game, the pad is assigned a letter randomly after you destroy the 115 meteor.  Anytime after the 115 meteor has been destroyed you must travel all over the map to shoot each pad and see what letter is assigned to each pad.  Then you must shoot the reset pad and travel to each pad and shoot it again in the specific order to spell the code: BRIANJRICKARD.  When you do this, Yote's room will open up.  Yeah, I know it doesn't make sense.  Drink a perk, and get all of the weapons but picking up a weapon from a piece of chalk drawn on a wall makes just as much sense.

After his unfortunate passing, Yote respawns on Samantha's Overgrown Pyramid/Island, located in a place surrounded by mystery and the supernatural - the middle of the ocean in the Bermuda Triangle.  You must defeat a Possessed Samantha and destroy the 115 meteor (hovering over this map) which powers the zombie infested and vegetation overgrown pyramid.  Both are just bullet magnets with 1 million hitpoints each but it is fun nonetheless.  Inside the pyramid is also a WWII style town (a modified oldtown map) with WWII style zombies (Russians, Germans, Americans and Japanese).  Also, the zombies are fully functional in that body parts fall off, helmets pop and a large amount of blood splatters from their necks when decapitated. Every place is accessible in this free-roaming world.  You can go on the roofs of all the buildings and inside them all.  The buyable ending is not based upon a cash system.  To purchase the buyable ending, you must complete the two objectives listed above and then find all 50 Nova Orbs scattered throughout the map which forces you to explore the town/map and not just find an easy place to camp.  Furthermore, there is an overpowered easter egg that is accessible after you  destroy the 115 meteor.
R.I.P. Yoteslaya 10/23/13 ...

Map made by
LosAngeles26 & Matpatcholywack 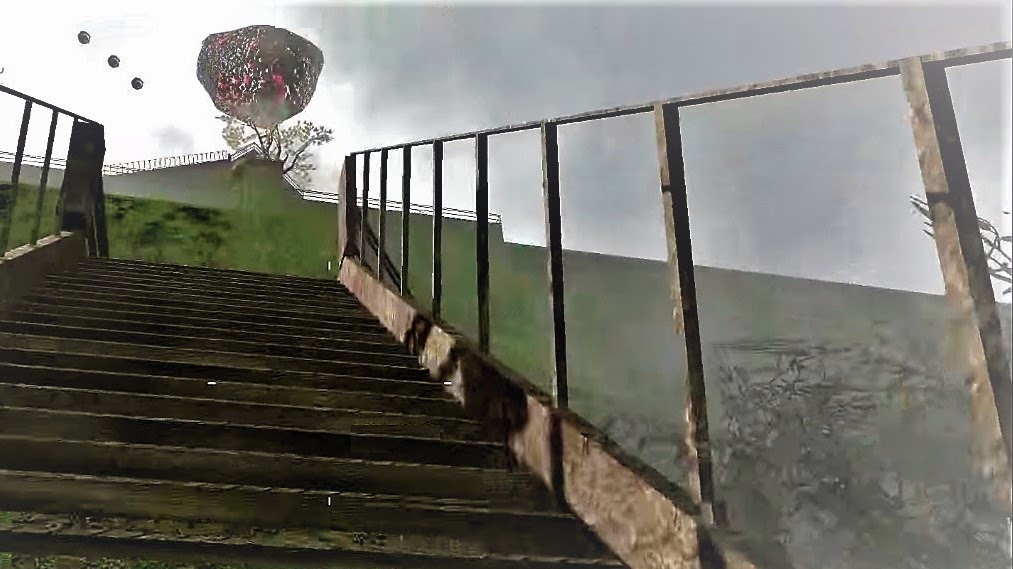 thugmaster
this map is awesome, but i wonder, is the map supposed to be the undead burg from dark souls

Let's all just light up a blunt, and make stuff.
I'm not always vocal about my atheism. But when I am, I'm just as annoying as religious people
×
AlecKeaneDUB's Groups
AlecKeaneDUB's Contact & Social Linksaleckeanedub

AlecKeaneDUBAlecKeaneDUB
Wow. This map looks incredible! I will definitely give this a try later and repost my feedback

It's not Mega, it's a fucking mediafire link... the worst

We wanted to update the download link when a person clicks the red download button from Mediafire to a Mega Download.  However, we couldn't find a way to edit the post after map approval.

If you could tell me how to edit the post and update the link myself or let an administrator know?
I haven't done much on this site and my account says I'm not allowed to send Personal Messages.

This is the Mega Download link for this map:
[You are not allowed to view external links. Register or Login to see them]

Fish. That is all

We wanted to update the download link when a person clicks the red download button from Mediafire to a Mega Download.  However, we couldn't find a way to edit the post after map approval.

If you could tell me how to edit the post and update the link myself or let an administrator know?
I haven't done much on this site and my account says I'm not allowed to send Personal Messages.

This is the Mega Download link for this map:
[You are not allowed to view external links. Register or Login to see them]

You can only send private messages and edit posts after you have posted 5 posts. Till then, a moderator such as myself can make changes for you.

Besides: yote was my favorite YouTuber before he died so I'm gonna love this map

Edit: oh boy where do I start about this map ( my complaints anyway )

haven't found the pack-a-punch yet

and Samantha, where do I even begin with her, quite overpowered ( but that's just me )

and Samantha, where do I even begin with her, quite overpowered ( but that's just me )

over all great map, just some complaints that's all

Yeah, if you don't like George Romero in the map Call of the Dead, you won't like Samantha in this map.  Samantha is similar to him.  However, Samantha must be killed to beat this map and has a meter to show her hit points.  Some weapons hurt her much more than others.  Shooting her gives you lots of money too.  Also, people playing coop could take her down pretty quickly.
Last Edit: July 25, 2017, 03:57:46 pm by losangeles26

JiffyNoodlesJiffyNoodlesAUS
what's up with the image quality tho? is that actually what it looks like in game?

Gentleman_Kirby
Nice looking map, Shame it's on UGX V1 though

Nice looking map, Shame it's on UGX V1 though

Thanks for the compliment.  I think V1.0 of the UGX Mod has more overhead for adding in custom content though.  We added back in 7 weapons from WaW (ppsh, mg42, stg44, thompson, trench gun, mp40, type100) plus some other stuff that we may not have been able to add if we used the newest version.  But drawback is that we would be missing some of the fixes between the mod versions.
Last Edit: July 25, 2017, 04:03:27 pm by losangeles26

TOMBMXradimaxukradimaxradimaxradimaks
hi why is half your pictures or more linking to this?