×
xJimmy33's Groups
xJimmy33's Contact & Social LinksxJimmy33
This map can be downloaded from the UGX Map Manager.


so, here are my second map:

THIS IS A WAW MAP so this map will not included black ops perks or modern weapons or something like that!!
play another map if you want them

-No story for this yet.
-Map made: 5-7 days
-My second map
-My first map I load up until now. can turn around for hours so my second map is the 1st ^^

this is a little objective / challanges map

-No pack a punch

YaPh1l - zombie eye's & typewriter intro --> Dr. Phil will have a surprise for you^^ -Made in Germany haha..

Eh?
[You are not allowed to view external links. Register or Login to see them]
(Click to enter portfolio)
×
SajeOne's Groups
SajeOne's Contact & Social LinksSajeOneSajeOneSajeOneseoePortfolio
In the future please refer to the rules of posting before creating a release topic, specifically towards point three. Maps uploaded to the forum need to be using the UGX Map Packer.
Requirements For Release Topics

I have now fixed the links in the post.

God-Mode
×
xJimmy33's Groups
xJimmy33's Contact & Social LinksxJimmy33
thanks saje for improve and new upload
i was a bit confused because UGX and ZM  have an own installer and both want their own on their website and i had no time to upload another 4 download links.. 2x UGX installer links and 2x ZM installer links..
with 7 kb's upload it simply takes too long ..
and thanks for the remark about easy-fx - in future maps i will be remove it
i think its not too bad with the debug mode..

Eh?
×
SajeOne's Groups
SajeOne's Contact & Social LinksSajeOneSajeOneSajeOneseoePortfolio
Well on top of that there are a few small issues that need to be fixed such as the colt having no sound and no playable area in hallways(unless that was on purpose). I would highly suggest you don't just abandon it. You took an extra step with this I don't see many mappers take, regardless of small or big. I think it would be a great map on the manager but it needs a small patch. Not many mappers patch their maps after release, which is a shame as some times it leaves glitches in that make the map seem like less of a treasure. Just some advice, I would recommend patching your maps as an anti-bug measure as it's common practice and it should be a priority to make your releases shine. Anyway all I'll say. Great fun little map, would love for it to be on the manager if you could release a small patch for some of the small issues I'm logging.

God-Mode
×
xJimmy33's Groups
xJimmy33's Contact & Social LinksxJimmy33
ok that sounds good.
I'll upload a v.2 if you tell me what else is there to fix.
maybe playable area, the colt sound, ugx installer and easy fx debug.

have you found even more that I need to patch?

Eh?
×
SajeOne's Groups
SajeOne's Contact & Social LinksSajeOneSajeOneSajeOneseoePortfolio
Also a lot of models in the map aren't clipped, like the big rock in the first area and a lot of the objects in the hallways. Other then that I think you're good. 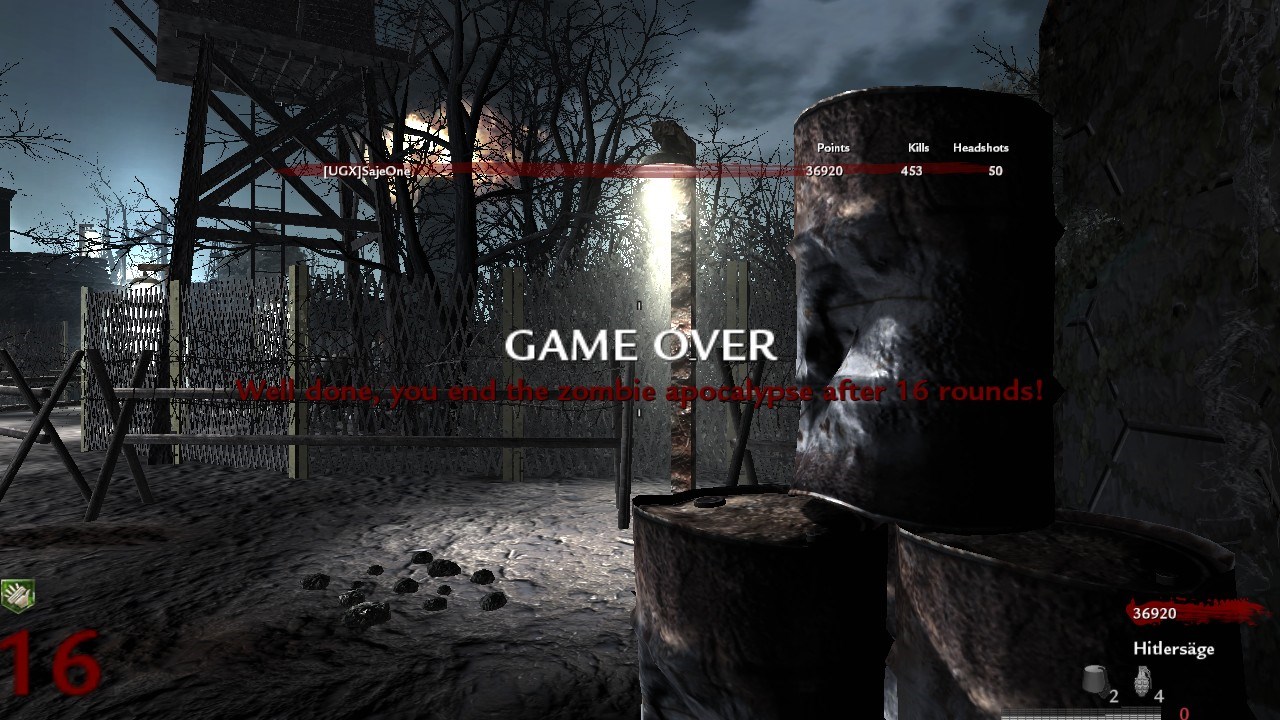 okay i will fix the things and upload the v.2

Eh?
×
SajeOne's Groups
SajeOne's Contact & Social LinksSajeOneSajeOneSajeOneseoePortfolio
Looks good to me.  A model or two in the hallways(desk at end of one with weapons on) that you can get behind/go through but nothing game breaking. I think it's manager ready, but it would be great if you were to take a second look on that if you have time.

I really enjoy that perks are limited

IHammyhamx2y
so many germans here incredible

will the map avaiable in the manager?

Yes, I will add it soon