Created 2806 days ago
by tomikaze 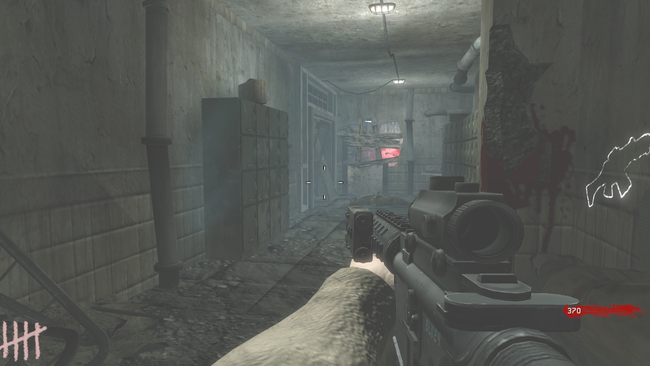 The mappers who made Fallout Assault Center are Nickst98 & Weezy428.

Setting:  Set in an unnamed east coast city in the U.S. Of A. presumably, you begin at the ground level of a giant highrise building that is in shambles. The area is completely devastated and the building you are in looks like it's almost ready to fall in right on top of you.

Positives:  This map wears its greatest strength like a badge of honor and that is the fact that it looks so freaking amazing. The attention to detail is beyond obsessive and engrosses you in the map from the very beginning. There are quite a few places to go as you open up an impressive number of debris working your way to the roof of the building. Each area you enter looks distinctive enough from the previous one that you never feel like everything has been painted with the same war-torn brush. As you get higher in the building you see a detailed laboratory and scorched rooms where you can almost smell the ash and charred interior. There is also the PAP machine and the 4 standard perks.

Negatives:  The downside to this map caught me by surprise really. After being so overwhelmed by all the eye candy and dynamic visual presentation I got to the roof and realized that the experience was over. There were no objectives, no story really that I could tell and no buyable ending for closure. Considering how much time was spent on the appearance I thought for sure there would be something to do outside of pure survival. Also, some people might not like how linear the map is because even though there is a lot to see it is all pretty straight forward once you do a minimal amount of exploration.

Conclusion:  This map was a lot of fun to play through a couple times and I could easily see myself picking it up again down the road just to be reminded of what pro mapping looks like. But without any objectives in this modern era of custom maps that really keeps it from being one of my favorites and from having the insane replay value that a map this good looking deserves. Maybe a version 2 will be released at some point and it’ll get beefed up a bit, who knows.

dust103194MrZ0mbiesFanatic
if they added black ops perks and objectives then maybe just maybe this would be on par with comosea.

Agreed, and considering it was Weezy who had a hand in this map, and his own first map 'Nacht Der Toten Walder' had more than stock perks and had an amazing objective to unlock the ending, I was very surprised to see this one was lacking in perks and objectives.

Really is an amazing looking map, but like 'Farm Swamp', it's lack of anything else is a serious off putter.

codnick98nicholas.stevens.58nicktheshrimp1zeldanick1nickth3shrimp
thanks for making a review tom, make sure to check out v2 when it out, that will have a bunch of new features, like ugx mod 1.1, easter eggs, more perks, also probably a few new guns

Date Registered: 22 August 2017
Last active: 146 days ago
Posts
2
Respect
0Add +1
Forum Rank
Fresh Corpse
Primary Group
Member
×
Kolbalt's Groups
Kolbalt's Contact & Social Links
The one thing i absolutely HATE about the map. NO TRAINING SPOTS! and the one place i could find to be a decent one, (very close quarters btw) Was impossible without Juggernog. (which there was none that i could find!)
The only real good thing i could find about this map though, was the detailing. It also had that heavy atmosphere about it being an assault fallout center of some kind.
So as a map detailer, id say these two did good, but as a map designer. id have to fail them. Hopefully V2 corrected a bunch of the mistakes. (i played v1) But yeah...im, probably going to try V2, but thats only if i want to try this difficult map again.

bruh this was made over 5 years ago.

Some of the topic sections on the site auto-lock after 90 days or so to prevent replies like this from ressurecting dead threads, but we chose not to do that for the review section because it doesn't really matter how old the topic gets, replies can still be relevant.

Oh man, I totally remember this map. This was the one where Nickst98 did 99% of the mapping and then Weezy428 tried to take credit for it

I wasn't aware of that. Weezy is/was one of my favorite mappers in the custom scene after playing his first map. Remember being impressed with the visuals of his second map but being disappointed with the layout and balancing of it. Did he ever release his Shin No Numa reimagining?