A few more details I need to find. I've seen these on NGTZombies so they are legit.
Sorry but you are not allowed to view spoiler contents.
1690 days ago

So I found a few more details that can hopefully help fill out this guide.
Sorry but you are not allowed to view spoiler contents.
+1 rep for this topic rich.

I'm jotting down a list and watching streams to find everything this map has to offer. Something I haven't done since Origins came out.

List of things I don't know:
Sorry but you are not allowed to view spoiler contents.
1690 days ago

Thank you for making this map, its a breath of fresh air.

Anybody know how many armors are available? I have found 8 so far.
1693 days ago

I have donated to UGX a few times. I do like the all the tech oddities they are working on and hope in the long run it can IMPROVE our gaming experience despite World At War being released almost 7 years ago.

That said, I am thankful the UGX staff caters to a level of transparency when it comes to money. In other communities such as Rom Hacking or Mugen, users will not accept or ask for money to help towards their projects and they shouldn't. Not their code. Simple as that.

UGX asking for funds to keep their servers up and pursue outside projects such as UGX Play and the new chatroom?
Its all good.

I'm sure that has been pointed out pages ago, but that is my stance on things.
1844 days ago

Re: Regarding COD online and GunofTruth

Heavy stuff, was guns also the guy who Ddos'ed the site last month?

Probably not my business but I am rather curious as the site is usually well maintained.

Also, Is Call of Duty Online available to U.S. Players now?
2073 days ago

I didn't expect this episode was going to go very well but I knew I wanted to see this episode more than "Self Help".

It seems that fire was toyed with alot in this episode, notepads set ablaze to distract walkers, a nice cameo from the prison, and even quick callback from The Grove. What did the symbolism mean to Carol? The path she has gone down and where it leads maybe?

It was cool with abraham as the story was clear and yet to be told, we know Carol and we know where she has been. Looking back either serves to confused the viewer or prepare them for something harsh.

That said what could we expect to happen once Daryl finds out the fates of Lizzie and Mika? Truth be told, I really don't want to find out. He seemed to Flip-Flop on taking out Noah a couple times before beth ever came into the conversation. Leads me to believe he is Bipolar or something.
2134 days ago

My body is ready. And so is my application for the beta sign up.

Talk to you all tomorrow evening. I'm gonna go play smash bros. to kill some time. 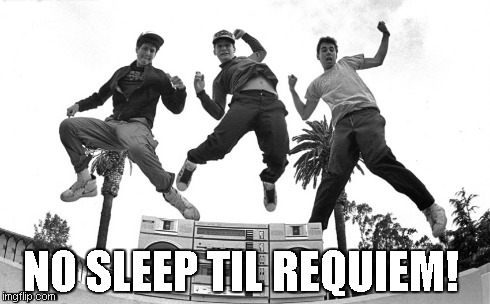 On a serious note, That purple sniper is badass. Almost like it was ripped straight out of a Mega Man X game.
2137 days ago

You have my undivided attention.

I found this episode to have some relevant meaning with the season's overall message. Retaining Humanity.

Wall of Text below!

For example Tyrese wants nothing to do with the violence the other survivors have resorted to after the fall of the prison after seeing two little girls snap over the thought of trying to be strong enough to kill both humans and walkers to ensure their own survival and forgiving his girlfriend's killer (Carol).

Rick on the other hand lost many people he loved and cared for and almost lost his baby girl because of Infighting whether it be from individual survivors or clashing with other groups. Doesn't begin to scratch the surface with Rick's previous shortcomings, and it may be sending Rick down a path from which he may not return. At this point, threaten his group and you will share gareth's fate. (As well as thomas, forgot how long rick had that machete.)

Dawn and Steven seem to have the facade of retaining humanity but their problem solving skills as well as their inability to take charge against atrocities unbeknownst to them makes said facade pointless as they may be too far gone as well. No doctor with dignity would kill another doctor out of fear for himself, they swear to an oath to save people no matter the cost. Dawn is supposed to Protect and Serve, you shouldn't beat up the help nor should you capture (Or Kill) wandering strangers.
2148 days ago

I can appreciate when work is put into such concepts. But I would like to be aware that a map I could be interested has a chance of scaring me to death.

Courtesy goes a long way in any community. That said, TTFN.
2180 days ago

I have strongly disliked the idea of a jump scare since prison mission by ZK.

When UGX play is ready to roll, a jumpscare tag would be greatly appreciated. A scary map is made through atmosphere, making the zombies much more fearsome should they be right behind you. Not an image of Pazuzzu playing peak a boo.

Fear of the unknown is the greatest fear of them all.
2181 days ago

Re: The death of a beloved actor/comedian...

Loved his stand up. His whole monologue about the creation of golf would make me smile any day of the week.

I told my mother yesterday evening and she broke down in tears. Living proof of Robin's lasting impact in our lives over the years. He will be sorely missed by everyone I know, friends, family and even acquaintances.
2230 days ago
1
2 3 ... 8 ❱