Created 40 days ago
by m4_semperfi

0 Members and 1 Guest are viewing this topic.
520 views

Date Registered: 5 December 2016
Last active: 3 days ago
Posts
9
Respect
4Add +1
Forum Rank
Legless Crawler
Primary Group
Member
×
m4_semperfi's Groups
m4_semperfi's Contact & Social Links
A work in progress mod by John_Banana (myself). I will hopefully finish this year, but I bet I will keep coming up with new fixes & ideas for another year or so.

This mod is designed to enhance the experience of the 4 WaW zombie maps without making them feel overhauled or foreign. Half of this mod is fixing bugs & consistency errors between the 4 maps. (Such as different weapon stats, the Jug glitch on Der Riese, player hands not being accurate to the character/3rd person model you have, etc). The other half is adding in new subtle features, inspired by the Black Ops series, that are still Treyarch style and accurate.

Note: Due to the nature of WaW modding & my limited skills, I figured it'd be easier to just make each map have their own mod file

## General Changes & Improvements
* Wunderwaffe Jugg glitch fixed
* Player spawns as a random character (On solo)
* FOV is set to 80 by default (Going full 90 makes a lot of the reloading animations look weird, so I chose 80 as a good middle ground)
* All 4 maps have more accurate intro HUD texts with dates in the bottom left
* When holding the Kar98k, the missing Bowie Knife sound effect is now fixed
* Accurate playerhands for our 4 heroes:
Here is a work in progress screenshot of them (This was my rough draft before I changed Nikolai's to be accurate to player model) 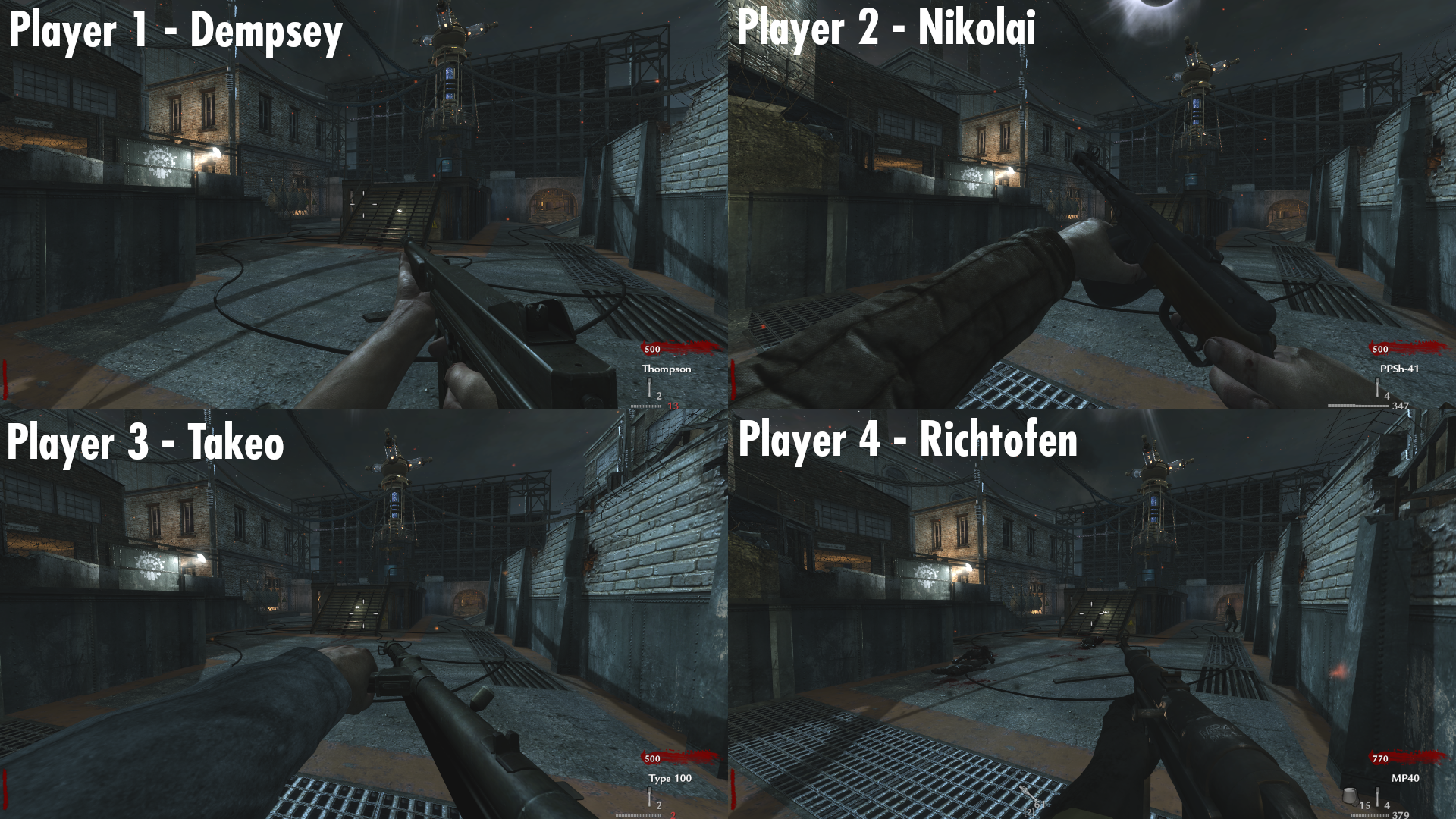 ## Individual Weapon Changes
* Wunderwaffe now kills 12 zombies in one chain (Not 10), and when upgraded, it kills 24 (with a faster spread)
* Knife lunging is less common (But they still happen if you are really far from a zombie)
* Weapon files from Der Riese used for all maps - meaning all weapons now have the same recoil/sway/damage across all 4 maps
* Molotov Cocktails recieved a substantial buff so they can actually kill zombies now.

* TO DO Double points stacks if you have 2 active at the same time on Der Riese, like the first 3 maps
* TO DO Instakill always gives 100 + 10 per kill no matter the kill method on all 4 maps, this was an intentional feature by Treyarch, but it was originally only 50 + 10 on Nacht/Verruckt until they buffed it

## Perks
* Double Tap now increases bullet damage by 1.5x (Similar to Double Tap 2.0)
* Quick Revive works on solo, you get 3 lives with it & can use the upgraded Colt while down


Planned Fixes/My to do list:
-Custom co-op tips
-Molotovs are silent on nacht, needs fix
-Bouncing Betties are glitched in my mod, they do no damage/script error
-Dogs missing animation on co-op
-Wunderwaffe reload consitant (Shi no numa the 3 bulbs had a clip)
-Fix the sound on the 2 jars for Der Riese easter egg, there is no SFX
-Max ammos now give Molotovs back on Nacht/Verruckt
-Max ammos resets the flamethrower cooldown
-+25 points when you prone at perks for all maps with perks
-Electric traps stay active for 30 seconds
-Volume of easter egg songs is louder & equal across all 3 maps
-The unused Radio #5 from Der Riese re-added
-Flamethrower ADS fix
-Bleed out time buffed from 30 seconds to 45 seconds
-Explosive damage/splash damage is the same on all 4 maps (Based on Der Riese, Ray Gun/Panzershrek/Grenades/Molotovs)
* Scoped Mosin Nagant added to the Mystery Box on Der Riese with working sounds
* Scoped Kar98k removed from the Mystery Box on Nacht Der Untoten (Only obtainable through the hidden cabinet)
* Type 99 LMG added to the Mystery Box on Shi No Numa
* Stielhandranates & Colt removed from any Mystery Boxes that they were in

Basically to summarize, when I'm done with the mod all 4 maps will finally have the same set of weapon loadouts with the same stats and models (no random bipods), but each with only one unique weapon (Excluding Wunderwaffe/Monkey Bombs). I will outline the unique weapons below:


If you'd like to contribute let me know, or give any ideas! I still have a lot to do and a lot of things to learn. The bouncing betties are probably the most annoying thing, I haven't edited them at all but they just don't work.
Last Edit: August 16, 2020, 09:22:18 am by m4_semperfi

This is exactly what I wanted in a mod, if you ever need help, let me know.

Thank you so much dude! Here is my current to do list, if you can offer any advice/guides that would be awesome. If not, one day I'll figure everything out eventually, I'm learning as I go.

-For some reason on Nacht/Verruckt/Shi no it shows "upgraded ammo 4500" on wall weapons (something in my script?)
-I have a custom 'game options' with an FOV slider etc. on pause menu, but the background is transparent instead of being blurry with black bars
-Nacht has working flamethrower ADS, but on the other 3 you can only aim while firing
-Make it so you get +100 on insta kill  for nacht/verruckt, currently only +50
-Molotovs are silent on nacht, no lighter sound effect/no explosion sound
-Bouncing Betties are glitched, they do no damage on all 4 maps except shi no numa
-Dogs missing animation on co-op (treyarch issue)
-I want to fix the sound on the 2 jars for Der Riese easter egg, there is no SFX, the one by Type 100 works perfect like on Kino, it makes weird noise then press F the noise stops
-I want to make max ammos give Molotovs back on Nacht/Verruckt
-I want to make max ammos resets the flamethrower cooldown
-+25 points when you prone at perks for all maps with perks
-Electric traps stay active for 30 seconds instead of 25 ( i think it was)
-Make all 3 easter egg songs louder/the same volume, and under the 'music' setting in sound options
-re-add unused Radio #5 from Der Riese files
-Bleed out time buffed from 30 seconds to 45 seconds
-Explosive damage/splash damage is the same on all 4 maps (Based on Der Riese damage, Ray Gun/Panzershrek/Grenades/Molotovs),nacht/verruckt the splash damage was way stronger
Last Edit: August 18, 2020, 07:46:40 pm by m4_semperfi

ITS-CS117
I remember seeing this on reddit, glad to finally see it come here to UGX

Date Registered: 5 December 2016
Last active: 3 days ago
Posts
9
Respect
4Add +1
Forum Rank
Legless Crawler
Primary Group
Member
×
m4_semperfi's Groups
m4_semperfi's Contact & Social Links
Progress has been slow but mod is still going as planned. I have all my custom weapons (type 99,  scoped mosin) in game now working great. Not sure if I will add more. I have also since updated Nikola's hands to be accurate to the player model. Yellowish tan sleeves with blood splatters.
Last Edit: August 30, 2020, 04:07:34 pm by m4_semperfi

GongsunZan
Looks pretty great so far! I really like the fact you're trying to keep the feel of the original maps.

Will the Type 99 be on all maps or just Shi No Numa? Same with the Mosin Nagant and Der Reise.

I know these weapons also have PaP variants in the game files, so it would be pretty interesting to see the Type 99 in Der Reise

Looks pretty great so far! I really like the fact you're trying to keep the feel of the original maps.

Will the Type 99 be on all maps or just Shi No Numa? Same with the Mosin Nagant and Der Reise.

I know these weapons also have PaP variants in the game files, so it would be pretty interesting to see the Type 99 in Der Reise

Hey, sorry for late reply. Yeah so originally my plan is to just give each map a unique weapon, so Nacht/Verruckt already have that by default and Shi No would get type 99 and der riese gets mosin. The reason for this limitation was to keep it very similar to treyarch and also I was unsure of my ability to get guns working with sounds, models, etc. Luckily, I was able to get the type 99 into Shi no numa no problem, everything working, which means, I could probably get it into Der Riese now that I think about it. That will be something for once im done with my main to do list.

Anyways, as a general update for anyone who sees this thread: I have stopped working on the mod for a couple weeks and been busy with school but I will start back up on it again when I feel like it. This is a mod that's being done in the long haul.. So don't expect anything finished for at least a year, and maybe 2-3 months for a beta release.

RedoNavaJulio RedoNava
Bro, the mechanic of being able to change the use of the knife has been very cool. I love the DG-2 jug fix and i hope you can solve the betty glitch.