Created 1332 days ago
by whippytrout

If you like my work feel free to donate: [You are not allowed to view external links. Register or Login to see them] 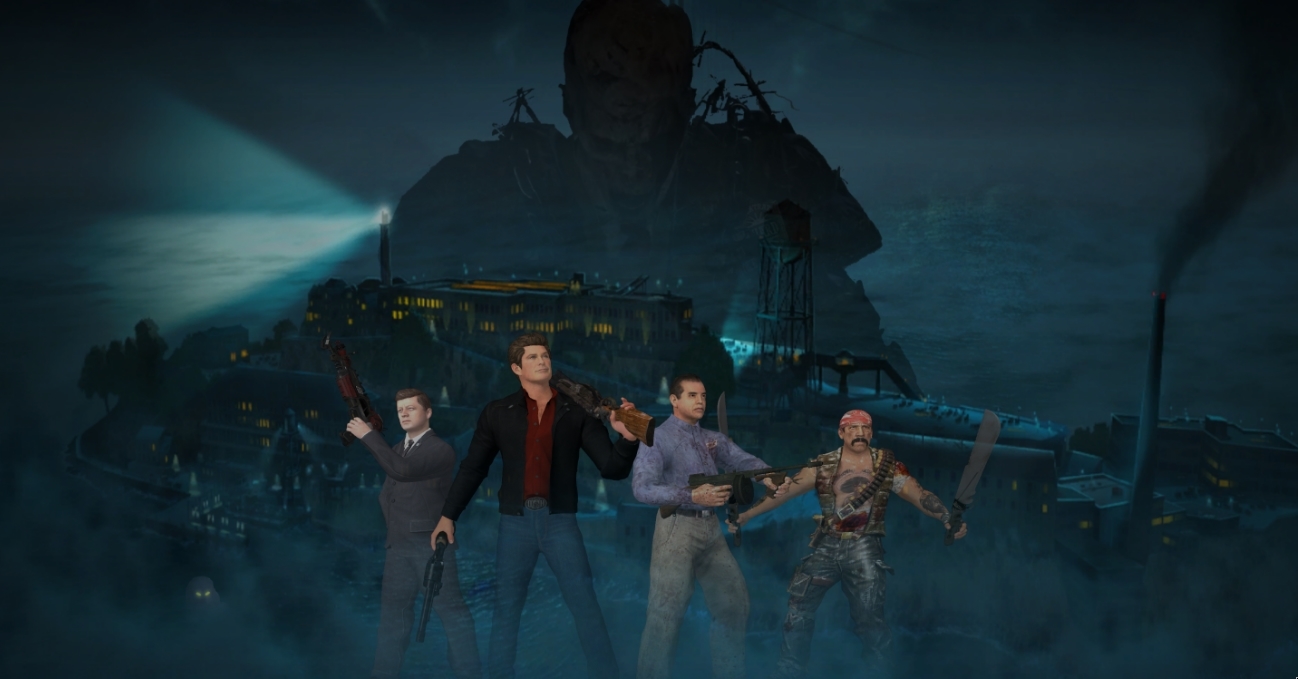 Story:
March 21, 1963 The year Alcatraz Federal Penitentiary closed. President John F. Kennedy had scheduled a political trip to Dallas, Texas in order to smooth over frictions in the [/img]Democratic Party. He decided beforehand he would attend the shutting down of Alcatraz and visit the prison one last time while it was still operational. As JFK docked at Alcatraz Prison he was greeted by three strange men. One was wearing prisoners clothing (Sal) and was covered in blood. The second was a short Mexican with a mustache and red bandanna. He claimed to be an top notch mercenary and expert with a machete. (Danny Trejo AKA Machete) The last man was a tall well groomed man with slicked back hair and a black leather jacket. (David Hasselhoff) He referred to himself in the third person a lot and seemed to think he had been kidnapped and was the center of a twisted experiment deep within the depths of Alcatraz.

As the unlikely group of men began investigating Alcatraz it became pretty clear that something evil had taken over the prison. A zombie outbreak of some kind had spread throughout the prison infecting prisoners and guards alike. No sign of the warden could be found but Sal spoke of a beast of a man named Brutus who was the head guard of Alcatraz. Sal said Brutus was pure evil and had  sacrificed the warden in some sort of ritual deep beneath Alcatraz. Brutus was obsessed with the pursuit of mystical items. He believed they contained powers, powers that could manipulate the very fabric of existence and even bestow upon him unworldly powers.

The four men didn't know what exactly was going on on the island but they knew it was bad when the hordes of the undead began descending upon them. As they went to get back onto the boat in order to leave the island a loud voice rang out, shaking the island itself. It was the voice of Brutus, "No one gets off this rock! This is your prison!" he roared. The boat was then swallowed up by the ocean and the men braced for an epic showdown against the undead zombies on Alcatraz.

Notice!!!!
You MUST download the .dll file below and put it in your Call of Duty WaW root directory in order to play this map. This is an engine mod that increases the limits of Call of duty WaW
The original post for this mod which has more details on what it does can be found here:
http://ugx-mods.com/forum/index.php/topic,8092.0.html
T4M: This is the Engine Mod Download that goes in your root directory

[You are not allowed to view external links. Register or Login to see them]
Instructions:
To install the engine mod simply go to your steam library, right click Call of Duty WaW, Click properties, Click the Local Files Tab, Then click browse local files. Then drag the .dll into that window that opens.
If you don't have the Steam version of the game your game is probably in C/programfiles(86)/Activition/Call of Duty - World at War

If you have a disk version of Call of Duty WaW then you must download and use a lanfix.exe. A Google search for a Call of Duty WaW lanfix exe will take you to what you need. I personally don't have the disk version of the game but I've seen respected members of this community with disk versions of the game use a lanfix in order to play and they seemed to have no issues. If you have any issues please search the UGX site for details, there are several maps using T4M and this question has been answered quite often.
Last Edit: July 22, 2017, 09:01:19 pm by whippytrout

FlamingFox5
my body is ready

I don't really know what to type here so....

MajorPwnege1
Bless you whippy, bless you

Gonna try it in a few min

OshaPooOshawat750
FINALLY! Glad to have beta tested this, for those who don't know, YOU HAVE NO IDEA WHAT YOU ARE GETTING YOURSELVES INTO!

We love you man!

PSNtoonjuice
But really, congratulations! Thanks for making WaW a legacy!
Last Edit: June 05, 2017, 03:19:59 am by PSNtoonjuice

Thanks man! Just like MOTD there is no quick revive.