Showed this a few days ago on Discord but for those who don't use it, here's the trailer. Hopefully the map will be out within a couple of weeks

I was hoping to get a beta out this weekend, but I have some serious issues with the map. I have the easter egg scripted and nearly finished in my test map and it works fine, but for some reason the scripts refuse to work on this map. I've literally copy-pasted everything from the test map to this map without success. So we'll have to see how things go.

Sorry but you are not allowed to view spoiler contents.
540 days ago

Map layout is done, most of the map in general is done. Weapons are done. All it's pretty much missing is the easter egg and bossfight. And of course some things need some polishing. I can't think of anything on the easter egg side, which is why it's taking longer than expected (I don't want the easter egg to be just random soul chests).

Also due to my current life situation I'm only home once every two weekends or so, which is why I barely have any time to work on the map.

I do have an early version of the map in the workshop, which I have sent to a few people, and if you're interested in trying that, you should PM me.
603 days ago

Some early gameplay of the map. Lighting and detail in outside areas is still not finished so they look quite bad.

So much for those weekly updates but the modtools have been a pain the last few weeks. First of all the mapfile broke, so pretty much everything mapping wise is the same as it was 2-3 weeks ago. After that, APE stopped working and refused to open.

But anyways, here are some in-game pics (lighting might look different since I have settings pretty low on BO3, looks better in radiant)

Sorry but you are not allowed to view spoiler contents.
734 days ago


No pictures today, there's really nothing to show/I don't want to spoil all areas


This week was the first coop-test of the map (I guess you would call it an alpha build). And of course, there were some good and bad things to notice.

A pleasant surprise was that we didn't really experience any game-braking script issues. There were no crashes and all features worked relatively well.

There was a game-breaking bug though. For some reason the map has these invisible walls, that block access to many areas. These are weird because

there's literally nothing I have placed in radiant in these spots, yet these "walls appear". There doens't appear to be any errors related to this in the compile log either.

I have no idea what this issue is, I have never seen anythinglike this. Hopefully it will get sorted though.

The other concern was the map size. Due to the map being so big, especially earlier rounds seemed to go quite slowly. Will improve on this as well.

Other updates:
Next week I will start scripting the boss fight.

I don't want to spoil much, but if you've seen recent updates, you might have already seen mr boss guy

Since I now have some time to work on this mod again, I've decided to start posting weekly updates. So here's what has been done in the past week.

Mapping:
Sorry but you are not allowed to view spoiler contents.
Scripting
Other:
763 days ago

Re: Any good tips for mapping?

What do you mean the Verruckt mapfile came with the modtools? I don't have it.

And yes, making a zombies map should take at least a couple months. My map "Reichskanzlei" took 6 months because I remodeled the map many times, mostly because I didn't really plan it.

It took me 2 months to make this small map here. (I will release it soon)
(Image removed from quote.) 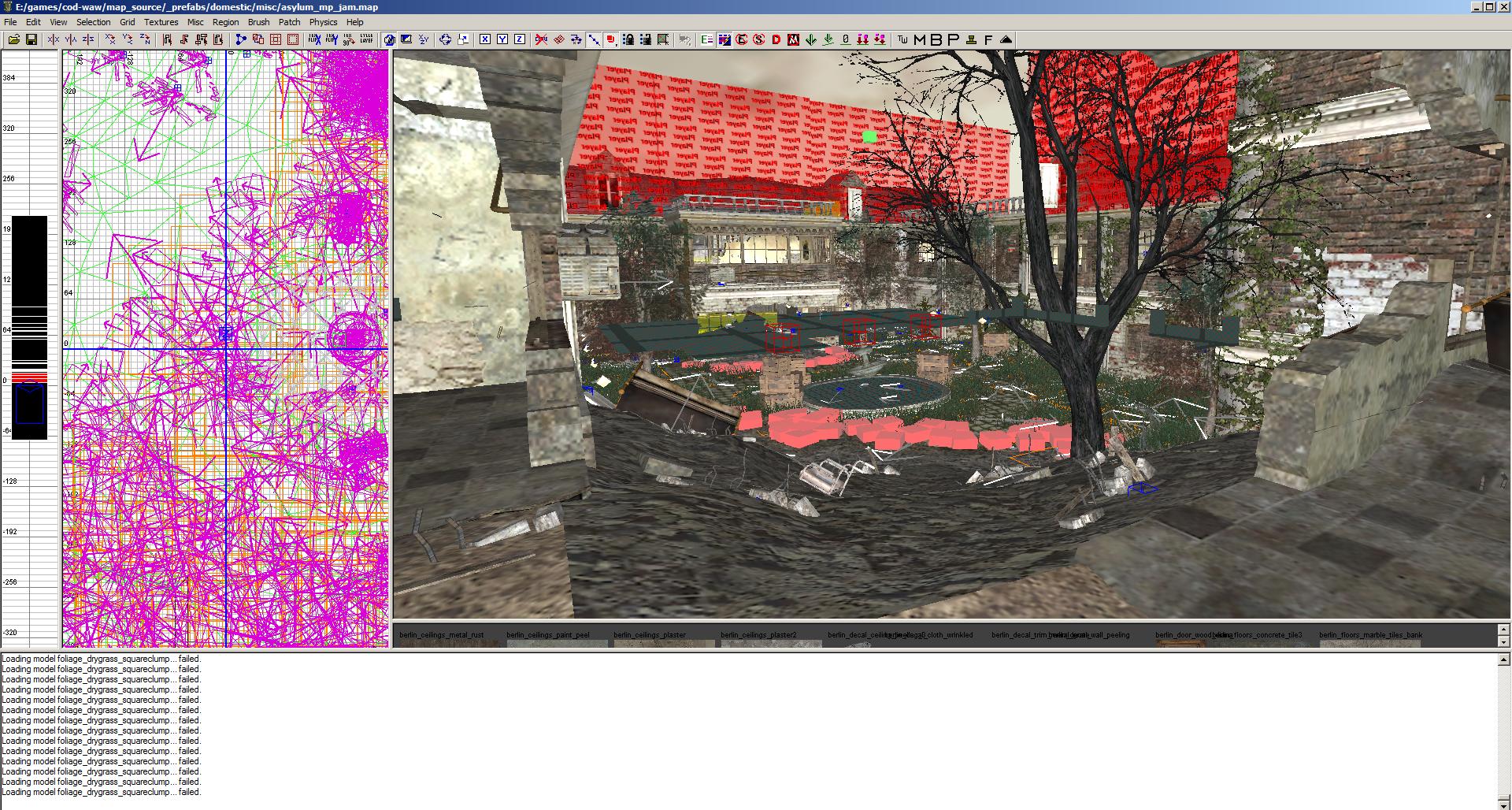 They didn't really advertise it properly, but it can be found in _prefabs/domestic/misc/asylum_mp_jam.

Seems to be more like the multiplayer map Asylum but both use the same base.
770 days ago

Re: Any good tips for mapping?

The only thing you could do with the original Verruckt is add weapons and pap through script. You couldn't add more areas unless you remake the map yourself, because the .map files are not available. Don't let this discourage you from mapping though. If you spend some time making simple maps and getting comfortable with radiant, you will develop a lot of mapping skills and you might be able to remake Verruckt and add more areas.

Here's some advice when you decide to make maps: take your time. Good maps take a lot of time to make, and rushing them is not a good idea. I hope this helped

Verrückt mapfile came with the mod tools so techically you could create your own version of it. It's not a 1-1 zombie version of verrückt but the basic layout is there.

Other than that I agree with you. Best is to take your time and learn as you do. If you need help, there are some tutorials on Youtube ranging from simple geometry to advanced map editing. Another good tip is to find reference pictures. Find some images from Google or go in game and explore.

As for how long making a map takes, my WaW maps took about 4-6 months on and off (I've made 3 maps). This time included mapping as well as scripting and weapon porting. The current one I'm working on has taken close to 2 years (hopefully that doesn't scare you away, lol). If you plan on using an existing mapfile as a base, you can get things done quicker. The longer you work on a map the better it will be.
770 days ago

Been working on some buildables:

This is most likely the last scripted feature I'm going to add (other than the easter egg of the map). As for a release date, hopefully it will be done by summer.
771 days ago

Try this and check if it prints the error message. If it does, you have mispelled the kvp or haven´t set the model as script_model
777 days ago

Re: Zombies stop when I change zones

Make sure your doors have DYNAMICPATH checked. 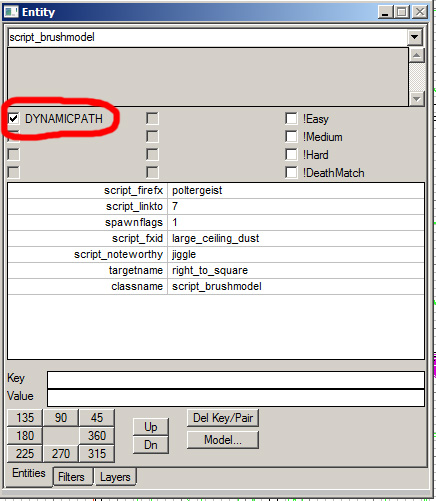 If you don't have this, the door doesn't connect the pathnodes between the doors. And so the zombies can't path to the new zone.
784 days ago

Arguably everyone's least favorite boss. So why not bring it to Black Ops 3.

By the way I'm open to suggestions on how to improve him (I don't want a 1-1 replica of the Tranzit version) so feel free to give your opinion.
This was the first time I've tried to script a shooting enemy, and I think it turned out alright. Still needs some FX work and sounds. 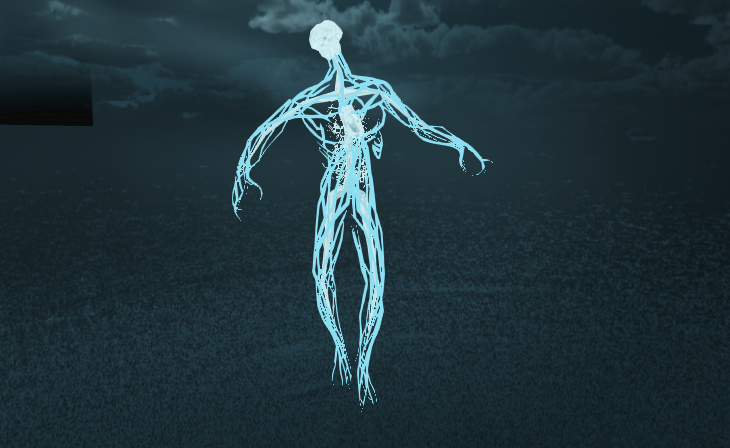