gotta be some dumb joke - no way would he get it (madgaz or whatever his name is), if it is true then - its not about talents its about views.... very stupid

It's about who knows people at 3arc lol.

Although, for the record, almost everyone else who got the alpha tools well deserved them. But, there are also people who deserve them that AREN'T getting them.
1776 days ago

Re: What are you sick to death of?

This topic got depressing real quick, cheer up you bunch of emos

Anyway, I'm sick to death of bruising my dick after jerking off twelve times in one day.
1782 days ago

-- PLEASE make a version with less weapons so that I can play the map without having to enter in the console name 4 times just to get it to run. Speaking of, the solo button doesn't work. Anyway, I'd rather play a map with less content than get repeated startup errors and have to download an obscenely large file. Nearly 700 mb's is pretty unacceptable IMHO, even for a beta.

-- The outside of the map just looks bad. I'd add heavy fog alongside the cliff edges, so that one can only see the skybox and the mountain texture beyond the ledge that they're standing on. It'd look nicer, be more immersive, and you could free up space by removing all the models at the bottom of the map.

-- Some of the models in the map feel spammed about, such as the 50 identical lily pads in the starting area. Just cut things like that out, I'd rather see a few well-placed models than a bunch of obviously identical models in the same area. Also, I'd replace the crates with the animated tarps with some other model, the tarps all blowing in unison in the exact same manner looks weird and unimmersive.

-- The lighting is very boring. I'd make the map dark and add some glowing lamps and whatnot about. Or you could just edit the worldspawn and make the map evening-styled, ala Shangri La.

-- Most of the guns I used had either inaccurate sights or abnormally high spread values. The KSG, Ballista, and XPR were the ones I used that had issues, but there's probably more.

-- You can fall into the mudslide river near the far end of it.
1824 days ago

Re: Poll: Should the Custom Map Ideas section be removed?

I just think it needs more moderation. Posts that are just lists, or are ridiculously long and elaborate, should be deleted by mods. Although, and I've said it before in multiple threads, I think the whole site needs tougher moderation and this would just be part of it. I mean I like the mods we have now, I just think it should be site policy to enforce stricter rules.

Introducing a list of necessary queries to be filled out when making a post (as someone suggested above) would also be a massive improvement, especially with a MINIMUM AND MAXIMUM character limit.
1825 days ago

Looks great. Muzzleflashes are IMO one of the most underused aspects in custom mapping.
1848 days ago 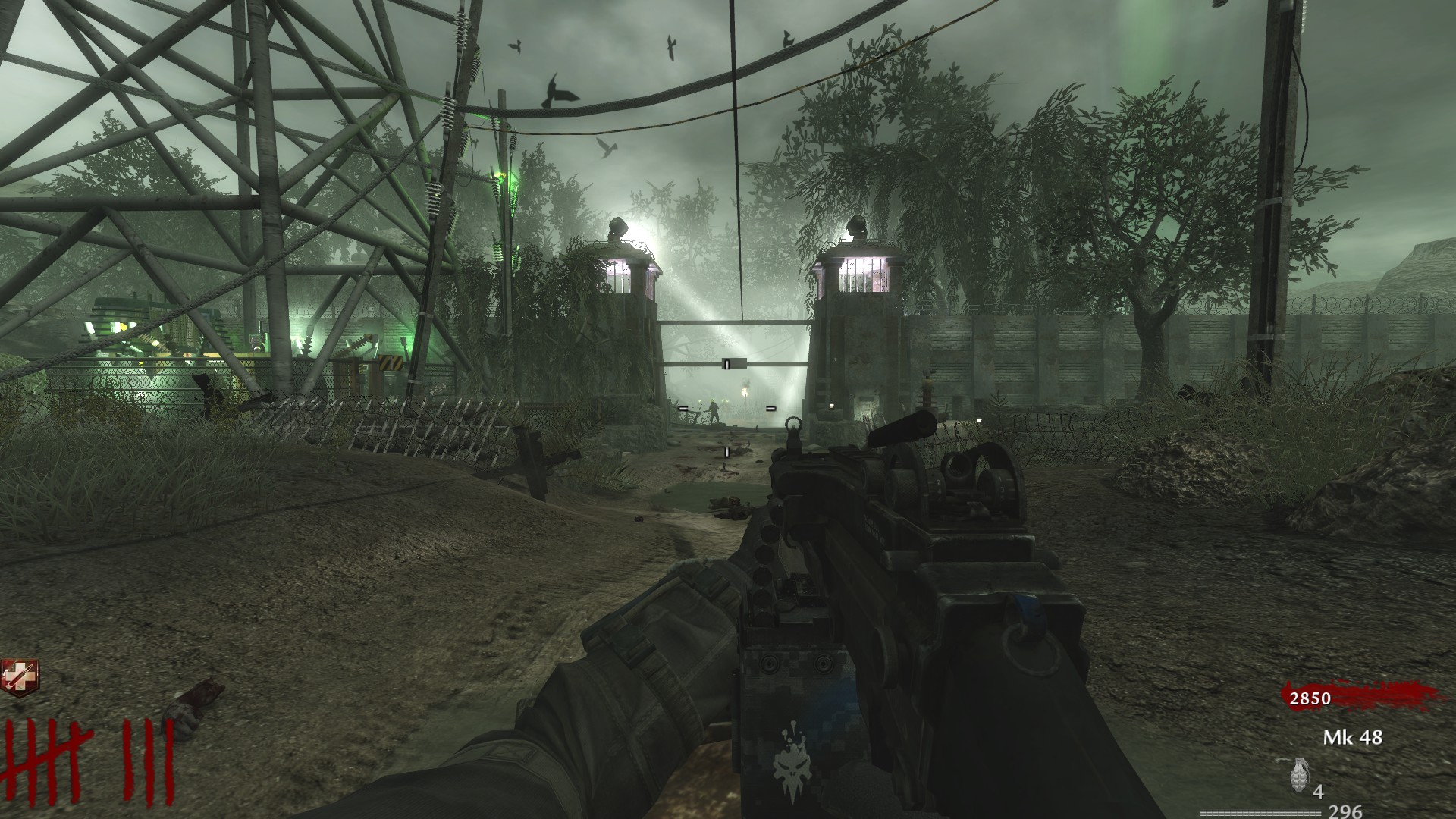 Just like a fucked-up, preemie baby, Contrivance 1.0 was quickly sent back to incubate, and now emerges as the bundle-of-joy Contrivance 1.1. Actually, something must have gone wrong with the incubator because Contrivance has somehow come out more fucked-up than when it went in… thanks Obamacare.

However, Contrivance is still a beautiful looking map, more beautiful than I could ever hope to be. Ok, so that’s not hard to do, but keep in mind that Contrivance is one of the best looking maps to be released in years now. Fortunately, the recent update did manage to make the map even prettier, as if to hide the underlying damage to the actual gameplay it brought with it. It’s like giving someone muscular dystrophy and then a facelift as a consolation prize: I mean, I appreciate the gesture, but it would have been nicer to be able to be walk.

This update did a few things. It replaced the WAW guns with BO2 ones, added an easter egg, and added a way to buy perk slots, plus some “rebalances.”

I feel like the mapper must’ve just broken up with a hot-but-crazy girlfriend, because the entire update follows a trend of superficial improvements hiding a worse overall experience. Case-in-point is the new BO2 guns. You pick them up and think: “Wow, these look nice! They even have proper reload anims and sounds!”

But, oh, wait -- the iron sights are MESSED the FUCK up. Why aren’t my bullets going where I send them? The hell? Oh ok, I’ll see if PaP fixes the spread or whatever.

Surprise! Your new PaP’d rifle has a god-awful reticle on its reflex that is somehow worse than the misaligned sights you thought you had escaped from.

Jesus Christ, you just can’t win. And to top it all off, the M8A1 has a recoil pattern so abhorrent and broken it renders the gun unusable. Better hope you didn’t spend 1200 buying it off the wall!

That’s because the M8A1 IS a good value if you get it from the mystery box… because then it’s free! Just like how the Israeli government gives its citizens free guns if they decide to live on Palestinian soil, the mystery box will give you guns for free too! All you have to do is cause it to move from its starting location once, and BAM!, free guns for life!

“Alright, alright, so the guns aren’t “all there” (like my retarded uncle) and the sweet young mystery box is a little bit too loose with herself. Don’t tell me you’re gonna rip the whole map apart for that!” you might be saying.

Don’t worry, I’m not. Contrivance is a fun map, and there’s plenty of unique areas to explore and doors to open. It’s well-paced, but not too difficult. Actually, it’s easy as fuck. The zones are pretty screwed, and this can lead to zombies spawning really far-out, which makes it a joke to run trains. Sometimes the zombies will even ignore you completely for a few seconds and just go down the zipline instead. Wheeee!

Ok, now I’m back to ripping on the map again, and I’ve already dragged on for too long. So, I leave you with this:

Contrivance is a good, nostalgic type of map that sticks to the established zombies formula pretty closely. It doesn’t take many risks, which leads it to be somewhat routine and almost boring, but still maintains a superb sense of flow and balance that makes it feel like 3arc’s own work. Unfortunately the map is hampered by glitches and poorly-done weapons. So, I’d recommend that you just play the more stable version 1.0, unless you really want to solve an easteregg (which I couldn’t be bothered with).

Wow, that’s about the most professional thing I ever wrote.

Yes, this section was one of my ideas back in the day. I had heard from a couple people that they were looking for a map to make but didn't really have any ideas of their own. I thought a section like this could be useful in giving people ideas for a project they might want to work on.
I agree, 99.9% of these ideas never happen and now most of them are complete garbage...not mine though

Do you feel a deep rooted sense of shame and regret for what you've created? How do you resist the urge to take justice into your own hands and end your life as punishment for this grevious sin?
1849 days ago

You don't get it bro. Mapping is a hobby. A hobby that I enjoyed for a long time. But when you work on the same project for over two years, it drags you down. (Literally I was pretty depressed about this project for the past year) It becomes something you HAVE to do, not something you WANT to do. When I stop enjoying something that I don't NEED to be doing, I stop. I don't see it as wasted time, I see it as a learning experience. If I could go back in time, I wouldn't change a thing, because I enjoyed (Past tense) working on this map and I improved my modding skill from 0 to pretty good. Ill take the knowledge of the experience over a half assed release any day.

If you don't respect my decision, it doesn't matter, because its MY decision. I was not modding for your imaginary deadline, I was modding for the enjoyment of it and to maybe release something awesome for the community. That did not happen, and that's OK. Regardless of BO3 mod tools or not, I still probably would have canceled this. You have no idea how an unfinished project can stress you out, and you have no bounds to criticize me, another modder or anything we do In our free time for the enjoyment of ourselvs and others. Good day to you sir.

A mod can lock this now please.

I just want to say, before this gets locked, that I really respect and agree with your viewpoint. I think mapping should be a hobby, but some people take it to an extreme and I don't think that's healthy for them or the community.

At the end of the day there's no money involved, nor "fame," except the humble respect our small community can give. So make something for yourself and fuck whatever happens, if it gets boring stop, if not then push it through. But do it for yourself, not anyone else, because it's your project and it should only be your project as long as you enjoy it. We're not paid level designers, we're just zombies fans.

And -- not trying to go off on a tangent -- but I do think, however, that we should try to cut down on the amount of WiP's because it can lead to disappointment. Again, there's no shame in canceling, but it does upset a project's followers, obviously. I do not plan to ever release a WiP unless I'm literally two weeks away from finishing the map and it's ready for beta testing. Honestly, if I created a WiP for every failed map I've made so far, I'd have released like a dozen threads lol, with at least a couple actually looking promising.

woah, In a hurry to review or something Shotgun?

got some good things to say about this one.
1852 days ago

Yeah well it doent matter now anyways because I just finished the Easter egg on my test map and it will be implemented by tomorrow! Sorry for the wait I know it took a lot longer than expected but it will be nice to have one huge update instead of multiple

S'all good dude, glad to hear it! I was just getting antsy cause I was waiting till BO2 guns before writing a review, lol
1855 days ago

I don't understand why anybody wants to wait for the easteregg to be packaged with the BO2 guns in the update? If you don't want to download the 300 mb again just for the guns, then wait till the easter egg update comes out. In the meantime, everyone else who just cares about the updated guns has to wait for no real reason, SMH.
1855 days ago