Created 1453 days ago
by HitmanVere 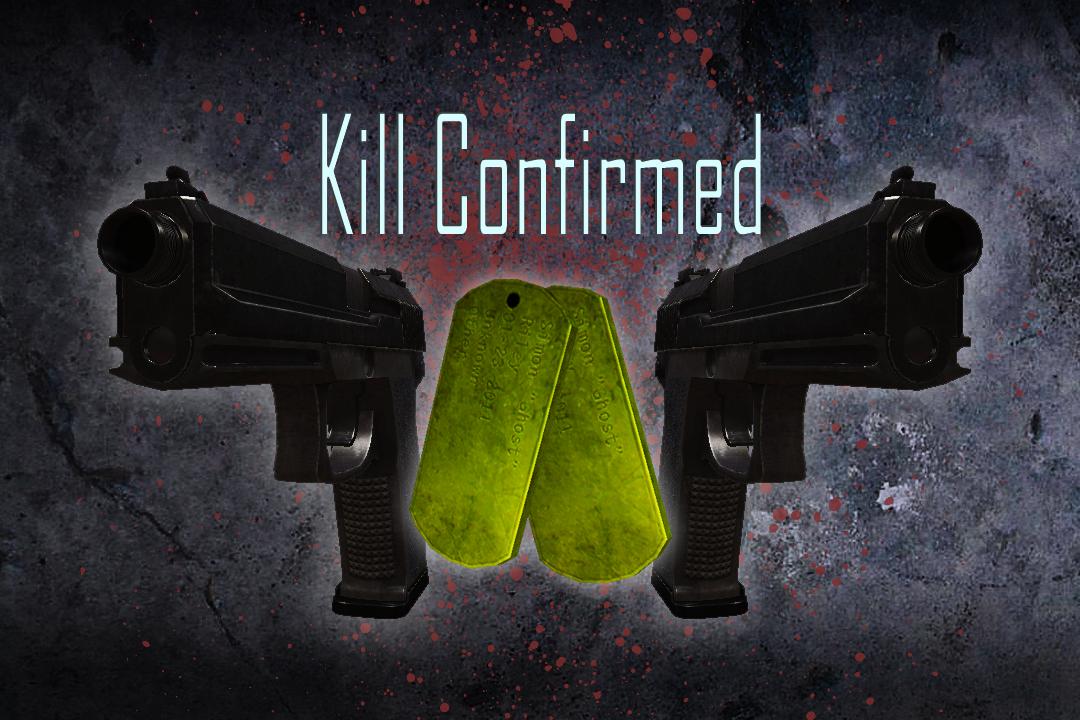 Ever wondered how Kill Confirmed would work in zombies? No need to anymore, thanks to this mod. Idea given by TheRelaxingEnd, I started making this mod in the middle of the night and finished next day, so it's really not filled with features, but it can be very hectic and is most suitable with more players rather than playing alone. This mod should work on all maps, except Dead Ops Arcade. If there are any issues, report them and I will check, if they are happening due to this mod or if its stock scripts.
Features:
-Classic gametype from Infinity Ward/Treyarch titles, Kill Confirmed, brought into Black Ops 1 zombies. Alone or in co-op, gain 150 tags and you win. Penalties will be given, if you go down though. Going down, when you have more than five tags makes you lose five of them, so better be without downs. And also remember, lonely tags will disappear after 15 seconds, so grab them quick!
-Starting pistol has been changed to MK23 from Killing Floor 1, which is also upgradable to Dual Wield version, just like M1911.
-Custom perk and powerup shaders are applied in this mod, which are also used in some other mods, such as Mod Of The Dead by Rollonmath42. Round chalks have also been changed to be ones from Black Ops 3 zombies.
-Pack-A-Punch camo has been changed to Etching camo from Black Ops 3 (Note, this camo does get applied to World at War guns as well, except it will look a bit different)

Video of the Mod:
Note: To run this mod, you will need game_mod made by SE2DEV, which can be found here:
http://ugx-mods.com/forum/index.php/topic,10956.0.html

After installing game_mod, you need to drag the mod in root/mods, then extract it there. After that, run BO_Mods.bat and select this mod. After that, just run any map other than Dead Ops Arcade and have fun!
Download link:
[You are not allowed to view external links. Register or Login to see them]
Credits:
Last Edit: June 08, 2016, 09:12:05 pm by HitmanVere

Rich_GamingRichGaming1
You bae! Nice job with the release.

×
timelordalex's Groups
timelordalex's Contact & Social Links
i thought this was about kill confirmed added to Multiplayer as well as BO1 lacked that.

You bae! Nice job with the release.

What if he intended to cal Hitman feces?

gr8 release m8, tried it last night, was good, however:

Sorry but you are not allowed to view spoiler contents.
[/spoiler]

Well Hitman is pretty shitty tbh...  Also, I make YouTube videos, I have to be on that wagon at all times.