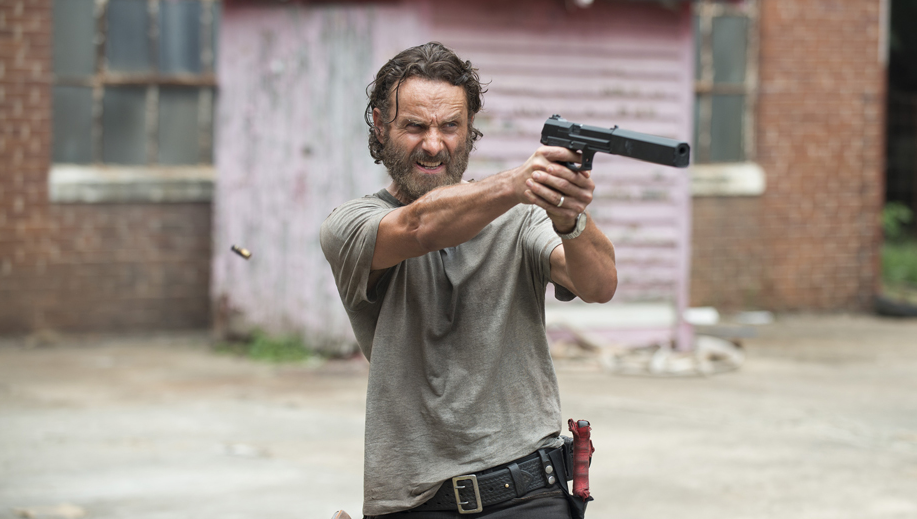 So in this episode we finally got screen time with every group. There is like 3-4 story lines going on at once right now, and they seemed to jump all over the place, so I am just going to go through each groups storyline and what happened in this review.

So lets start off with the church, who consists of Michonne, Carl, Judith, and Father Gabriel. After Rick and the group left to go to the hospital to rescue Carol and Beth, we see Gabriel scraping away at the boards on the church floor. Carl lays down some weapons, and tells Gabriel to pick one. When Gabriel refuses, Carl says "You need to learn how to protect yourself. Your lucky your church has last this long, you can't stay in one place anymore". Gabriel finally gives up and picks the Machete. He says that he isn't feeling well so he goes to a room to lay down. After awhile Michonne comes knocking on the door, and Gabriel opens it, acting strange. Michonne says she has come to check up on him, he says he is fine and slams the door. We then see Gabriel has used the machete to open up some boards on the floor which he goes down to escape, since there is boards on the door and windows to keep the walkers out. Once he gets outside he runs into a walker, who he is about to kill when he notices she is wearing a cross necklace, he just leaves her there and walks away.

The hospital story line consists of Carol, Beth, and Dawns group. Beth is seen mopping the floor. One of the doctors is talking to Dawn and Dawn mentions Noah, saying if he is still out there, they will find him. Then mentions Carol, the doctor says that she isn't worth the effort and she will die no matter what and they can't waste valuable resources on her. Beth over hears and mentions that the doctor uses electricity every day to power up his CD player. Dawn tries to quiet Beth down but when she realizes it isn't working, she tells the doctor to turn off Carol's machines, she says if she survives during the night then she is worth the effort but they shouldn't waste resources on her is she is just going to die. Dawn then tells Beth "You just killed that women". Beth tells Dawn to tell Doctor Edwards that she changed her mind and to turn the machine back on. Dawn said that she can't do that because then the doctors won't trust her anymore. Dawn hands Beth the key to the drug locker and tells her to ask Edwards what medicine to give to Carol to save her. Beth wonders why Dawn is doing this. Dawn says that she is wrong, she thought Beth was weak but she isn't, she is strong.

We then see Beth at Doctor Edwards office, when she asks what medicine to give to Carol, Edwards is wondering what she is up to. He accuses Beth of stealing the drug locker key from Dawn. Finally after awhile, Edwards tells her the name of the medicine, a name I am not even going to try to pronounce. We see a doctor outside of a room, whom Beth gives some strawberries to, he then starts faking that he is choking so the doctors guarding the locker go to check on him. Beth quickly opens up the locker and takes the medicine out that Edwards told her to look for. I am not sure if Beth should trust this doctor, when this exact thing happened in Slabtown, when Edwards tricked Beth into giving another sick doctor the wrong meds, thus killing him. But when Beth arrives at Carol's room, she gives her the medicine and tells Carol that she should know "Beth was here".

The Washington DC group consists of Glen, Rosita, Eugene, Abraham, Tara, and Maggie, otherwise known as GREATM, a name Tara gave to their little group later on in the episode. It picks up just moments after Eugene told everyone he is not a scientist, and gets knocked out by Abraham. Eugene is still lying on the floor, while Abraham seems to have lost the will to live. Rosita offers Abraham a drink, when Abraham refuses and knocks the bottle out of her hand, Rosita starts yelling at him, and Abraham stands up ready for round 2 of knocking out everyone. When Maggie points a gun at Abraham, telling him to sit down or she will make him sit down, Abraham sits right back down. Tara, Rosita, and Glen all go on a little fishing trip together, while Abraham, Eugene, and Maggie stay at the truck. Not sure how hard Glen had to convince Maggie, his wife, to let him go off alone with 2 girls, but whatever.  Tara, Rosita, and Glen make fishing nets out of old jackets and shirts. Glen and Tara are talking to Rosita, trying to figure out how she ended up with Abraham and Eugene. Rosita says that she was with another group at one point, and Abraham came and saved her from walkers. Eugene was sitting in the passenger seat, and thats when Abraham invited her to come with them to Washington DC. They then fill up their water bottles but notices the water is polluted, Rosita says that she knows how to make filtered water, something Eugene taught her how to do. Back at the truck, Maggie is talking to Abraham, and asks him if he wanted her to shoot him, Abraham says that he thought he did, but he didn't. Then we hear Eugene slowly waking up, when Maggie goes over to check on him, Abraham finally picks up the water bottle and starts drinking. So it seems like Abraham is finally coming back to the land of the living.

Our final group consists of, Rick, Daryl, Sasha, Tyreese, and Noah. Rick is going over the plan, he wants to just run in there and slit the throats of everyone in the hospital, but Tyreese says that he prefers to not have anyone die. I don't know why they invited Tyreese, when last time he had a chance to kill someone he didn't, and it eventually led to Bob's death at the hands of the Hunters. Tyreese says that they should capture a couple officers so they can reason with Dawn, saying that if she lets Beth and Carol go, then she can have her 2 officers back. Daryl agrees with this plan. We then see Noah shooting up into the sky, to alert the officers, so they can later ambush them. The officers spot Noah and Noah surrenders. One of the officers asks who was he shooting at. That's when the rest of the group come out and capture them. Once of the officers name is Bob, so one Bob died so this other Bob can join the show. Bob asks Rick, since hes seen the way he talks and acts, if Rick used to be a police officer. Rick doesn't say anything then Bob says I used to be one too. When they are walking closer to the hospital, Daryl gets taken down by Bob. Daryl gets the jump on Bob by using a walker head as a weapon.

When they arrive under the hospital. Rick takes the lady cop and the rest go somewhere else, while Sasha is there alone with Bob. Bob says that one of his good friends that used to work at the hospital is outside as a walker. Sasha says that she is a good shot and she can put him down. When they go over to the glass window, Sasha points her gun outside ready to shoot him when Bob smashes her head into the window. Yup, it was a trap. Bob is still tied up but he manages to get away and is probably heading back to the hospital to inform Dawn of what is happening.

All in all, this was a pretty big buildup to the Mid Season Finale which airs next week. I can't believe it is already here, seems like this season has just started, and now we are going on another 2 month break.

I did not come to create a map, I came to beat the sh*t out of yours!

Mayhem217
I think this episode showed us a little more than what was on the "surface" so to speak. After Daryl's scuffle with one of the police officers from the hospital Rick shows up pointing his gun right at the officers head, and keeps it there long after the cop gives up. To the point where Darrel had to call on him multiple times to derail his train of thought.(Not the first time he's had to.)

Rick wanted to kill him without a doubt and if Daryl had not stopped him would he have? I believe so. Rick is a changed man, as they all are. Except something dark is brewing within Rick.  We see it time after time where rick seems to be lost in thought, always in the heat of the moment right before or just after He's had to take a living humans life. What will the future hold for our heroic leader? Might see a whole new Rick Grimes before we know it. A very dark and demented Rick!