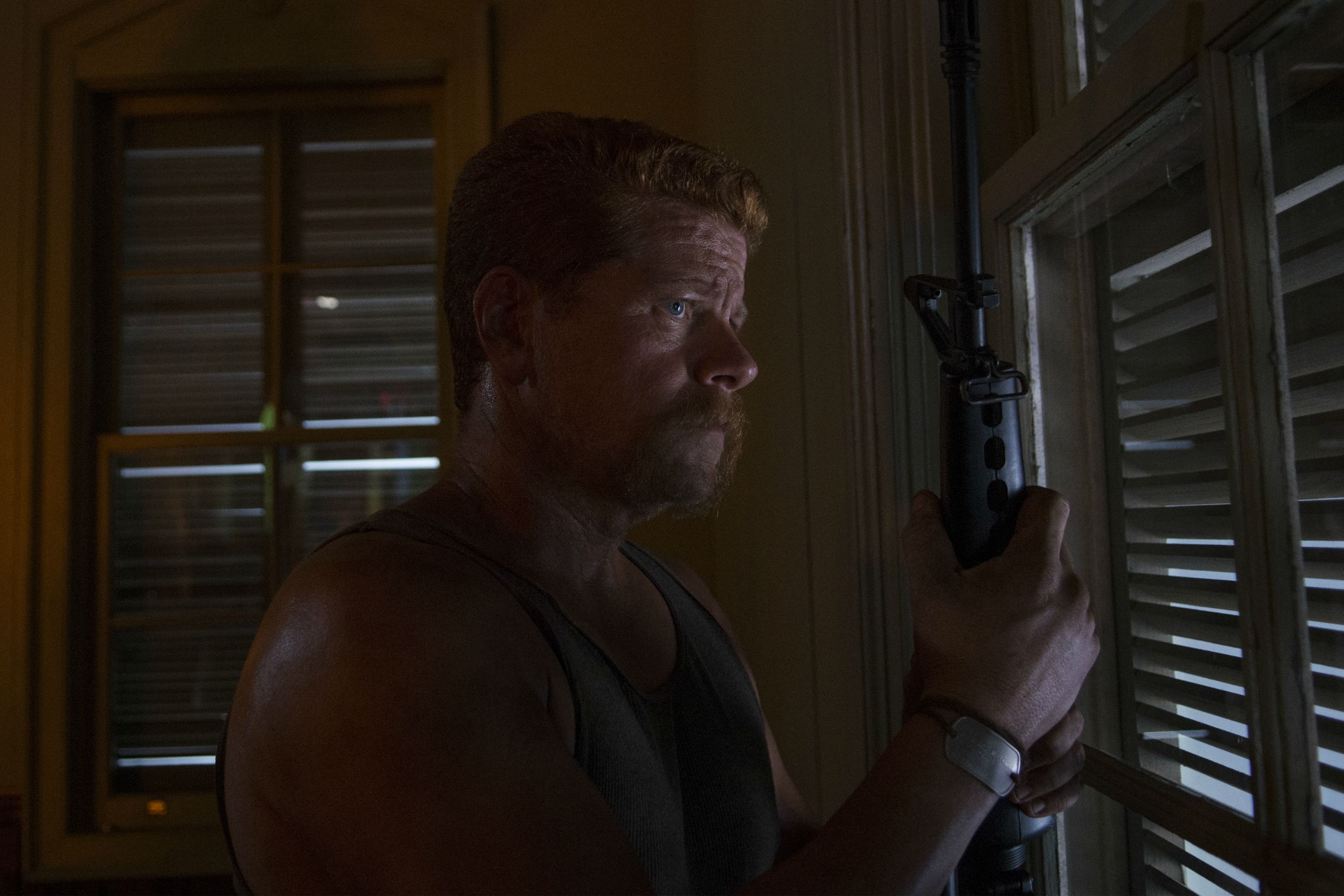 This review is a long one! Hope your ready

This episode starts off basically where the last episode ended. You have Bob there and the Hunters are still eating his leg, Gareth is talking to Bob telling him that before Bob got taken, they actually spotted Carol when she was fixing up the car, and they was going to take her but then Daryl showed up and they drove off, so the Hunters decided to go to the church and that's when they ran into Bob. Bob starts crying, but then he starts laughing, and the Hunters are wondering what is up with him so one of the guys wants to put a bullet into him, but Gareth said that they need him alive. Then Bob finally told them that he was bit, and they are eating tainted meat. The Hunters then start spitting out the food and Gareth knocks Bob out with 1 foot to the face.

Back at the church we see Sasha outside calling Bob's name, she hears someone so she zooms in with her scope, but before she can get a good look at the person, a walker stumbles on her so she has to deal with it. She quickly runs inside and immediately starts blaming Gareth for it, saying that he shows up, and they are being watched, and three of them go missing, the three being Bob, Daryl and Carol, not knowing that Daryl and Carol is off chasing Beth's captors. She pulls out a knife and is fixing to stab him when Rick and Tyreese calm her down.

We finally find out who Gareth really is, he tells Rick and the group that right when the outbreak started, he locked the church doors on any who who came to the church. He told them to go somewhere else. He also watched them die and turn, women, and children. He said that, because he did that, he is now being punished for it.

Then Glen sees someone laying in the woods, and it is none other than Bob, the Hunters left him there for the group to find, to know that they are still out there. When Rick learns that it is Gareth who captured Bob, he wants revenge, but Abraham said that they need to leave for DC, because Eugene's life is in danger. Rick and Abraham argue about it, but Tara finally came up with a solution, that if Abraham stays and helps them fight off the Hunters, that her, Maggie, and Glen will go to DC with him. Rick and the others want to stay and wait till Carol and Daryl come back.

Every one but Bob, Tyreese, Eugene, the baby, Father Gabriel and Carl go off to track Gareth, not knowing that Gareth is also watching them. When Rick and the group all leave, Gareth and the Hunters walk into the church, and announces that he knows who all is in the church and he knows that Rick is gone with the weapons. They are about to break into the room that the group is in until Rick and the group shoots 2 of the Hunters and tells Gareth and the rest to drop their weapons. Rick and Gareth are talking, and Gareth says "If you let us go, we will never cross paths again" but Rick said "I made a promise" and starts slicing Gareth into pieces, just like he said he was going to do in the premiere. Michonne also gets her katana back that one of the Hunters stole.

That same night, the group is saying their goodbyes to Bob. Bob tells Rick thank you, because Rick saved his life when he took him to the prison. Bob said that he didn't think that there was any good people left until he met Rick. Sasha and Bob is alone and while they are talking, Bob dies holding Sasha's hand(a really sad scene) as Sasha pulls out the knife to make sure he doesn't turn, Tyreese walks in and he volunteers to be the one to do it, Sasha hands him the knife and walks outside, and then we see Tyreese stab Bob.

The next day Abraham, along with Rosita, Eugene, Glen, Maggie, and Tara get ready to leave for DC, Abraham gives Rick a map of their route just in case Rick changes his mind about going. They take the church bus that they just finished fixing up the previous day.

That night, Michonne is outside and Gabriel comes outside and Michonne says that she couldn't sleep. Gareth says that he was thinking, not only about what happened the previous night but also about what he did before. When he goes back inside, Michonne hears a noise in the woods. When she goes to investigate, she sees Daryl coming out alone, and she asks "Where is Carol", then Daryl looks over and says "come on out", then the episode ends.

So it seems like every episode is going to end on a cliffhanger this season. The premiere ended with seeing Morgan, the second episode ended with the Hunters eating Bob's leg, and now this one with Daryl saying "come on out" leaving us to guess who he is talking to. Also from the promos seems like next week is going to be a Beth centric episode so probably won't find out who Daryl is with until the week after.

Discuss the episode here! Also let me know who you think Daryl is with. Is it Carol, Beth, Morgan, or someone totally different? My guess is Carol died trying to save Beth and Daryl is with Beth back at the church.

treminaor#8249My Portfolio
What the hell is with the preview of next week? I have never been so excited about the first 4 episodes of a TWD season! This is such a great show.

What the hell is with the preview of next week? I have never been so excited about the first 4 episodes of a TWD season! This is such a great show.

I love the pacing of this season. Usually after a premiere they have a few slower paced episodes then a big climax leading up to the mid season finale. So far this season hasn't slowed down at all.

Official_TSGOfficialTSGOGOfficial_TSG
i was so angry at the ending another fucking cliffhanger

Eh?
[You are not allowed to view external links. Register or Login to see them]
(Click to enter portfolio)
×
SajeOne's Groups
SajeOne's Contact & Social LinksSajeOneSajeOneSajeOneseoePortfolio
The episode in itself felt like it was resolved really quickly. I was imagining that the group was going to have a larger battle with the terminus survivors at a later episode. None the less I'm SO excited to see what happens next week.

It's possible that Beth might be there as well but I don't think they would have ended the episode on something so climactic just to find out that it's Beth. As well I imagine the next episode will be the timeline from the last time we see Daryl and Carol till now from their point of view. So we'll likely find out who it is near the end of the next episode.