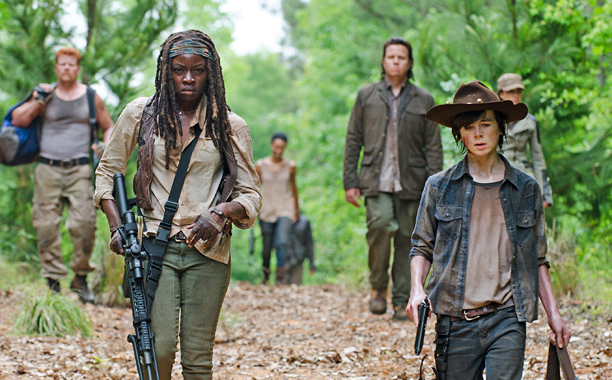 So after the season premiere episode last week, I figured that the show would slow down the pacing a bit for the next few episodes, and this episode was slow at times but the last 10 minutes was so amazing.

The episode begins with everyone finally having some time together. You have Rick and Tara, who finally talk together since the whole Governor vs Prison finale in season 4. Rick forgives Tara knowing that Tara didn't want to be there and didn't know what kind of a monster the Governor was.

Then you have Tyreese and Carol talking about what happened with Mika and Lizzie towards the end of season 4. "I just want to forget it" Tyreese says to Carol. Carol seems hurt by the situation even though she doesn't act like it.

Finally Carol and Rick finally talk about what she did in the beginning of season 4(burning those 2 people alive), Rick says he still doesn't understand what she did but he understands. It still seems like Carol is hurting about something else.

We then meet Father Gabriel who is screaming for help, Rick doesn't want to help him but Carl forces him to. Once they save him, Rick seems suspicious so he searches him for weapons and asks the 3 questions he asks everyone before inviting people to join their group. "How many walkers have you killed?", "How many people have you killed?", "Why?". Once Gabriel answers the 3 questions, all with "none", Rick says "Your hiding something, what is it" and Gabriel says that he is a sinner, he sins everyday, but those sins he confesses them to God. Gabriel says that he lives in a church so they decide to go check it out.

Nothing much happens in the next few scenes, they search the church, it seems pretty clean. Then Gabriel tells them of a place with a lot of supplies, so everyone but Carl, the baby, and Tyreese go. Daryl and Carly is off doing something else. Before they go Rick gives a speech to Carl, telling him he is not safe and to never let his guard down.

When they get to where the supplies are, they run into a lot of walkers, Gabriel almost dies but Rick saves him from a walker, Bob also gets pulled under water by a walker and it seems like he got bit but he made it out in time(or did he).

Back at the church, Abraham gives a great speech and invites everyone to go to Washington DC to cure the plague. Rick is wondering what to do, but after hearing the baby say something, he assumes it means "lets go" in baby talk. So he says "we are in". YAY road trip.

Later in the episode we see that Carol is gassing up the car they found earlier in the episode(is she thinking of leaving)? Daryl spots her and asks what is she doing, she says she doesn't want to talk about it. Then they see a black car with a cross painted on it(seem familiar) go past them. Daryl recognizes it and tells Carol that is the same car that took Beth in season 4. So they get in and go after it.


At the end of the episode, we see Bob outside crying(possibly got bit) and then a dude in a black hood kidnaps him, when Bob wakes up he sees it is none other than Gareth. Didn't take him long to get back in the show. Thought he would be another Governor, where he disappears for half a season only to show up before the mid season finale. We find out that him and his band of weirdos(the ones who survived that is) is in fact the Hunters from the comic books. When Gareth finally gives his speech about who him and his people are, it zooms out to reveal that they cut off Bobs leg and have been eating it. BobBBQ anyone?

That surprise at the end really made me want more, it was a good episode but no where near as good as the premiere. Wonder when Rick will finally find out that Gareth is alive? Wonder if Daryl and Carol will find out where Beth is and rescue her?

Eh?
[You are not allowed to view external links. Register or Login to see them]
(Click to enter portfolio)
×
SajeOne's Groups
SajeOne's Contact & Social LinksSajeOneSajeOneSajeOneseoePortfolio
I had completely forgotten about Beth at this point. Now there's another conflict to think about apart from what was shown at the end of the episode. Can't wait for next week!

I had completely forgotten about Beth at this point. Now there's another conflict to think about apart from what was shown at the end of the episode. Can't wait for next week!

Lol most people did. I noticed she wasn't in the premier episode for the season but I don't really care much for her as a character yet.