Created 2661 days ago
by tomikaze 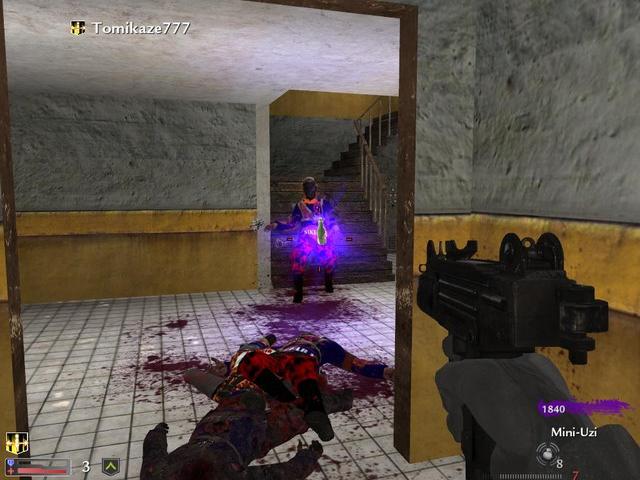 Ali was made by the mapper Nikfar who went on to release a map called Bazaar 2 and has another one in the works right now.

Setting: It looks like an office building or doctor's office that's been taken over by zombies and it's up to you and your other militant AI friends to figure out what's going on. Inside there are desks and filing cabinets as well as dead bodies on carts, wheelchairs, generators and a laboratory. It is decorated very well and mostly in keeping with the office theme. There are also lots of pictures of the map maker on the wall in various scenes, so he clearly wants you to spend hours on end looking deeply into his eyes and to be thinking of him while you sleep.

Positives: Nikfar did just about everything right on this map. For starters, you can tell right away that he spent a lot of time making the map look great. And given the limited space and narrow hallways you never really feel safe. There is also a very interesting easter egg that you must do in order to get to the buyable ending. There are six pieces of an amulet that you must find which unlock an important door and you have to find a diamond knife to access an axe which you need to get onto the roof in order to progress through the map. There are usable elevators, secret passage ways, and a gun store that you have to find the key for as well. There are custom weapons in the mystery box as well as custom skins for the zombies and the guns. This map also utilizes the ZCT Mod with its dropping perks, crazy variety of zombies and use of the Modern Warfare weapon set.

Negatives: Nothing major. There are some ambient sounds and voices going through the air that start out creepy but can become annoying after a while. If you are a fan of maps with open areas just know this map is extremely close quarters unless you are on the roof. This isn't a huge deal, just something to think about. Also, you will probably kill all of your own AI teammates immediately for their weapons and ammo and because they are more annoying than helpful. So, who's the monster now you soulless murderer? Maybe the zombies were sent here to cleanse the earth of YOU! Ok, I'm done.

Conclusion: Unlike some maps where the easter egg is just annoying to accomplish and you only do it so that you can say you did, this one is actually very fun to do over and over. With friends or solo it is a blast and each new area of the map is a lot of fun to explore. The amount of money that you need to save in order to open your way through the map and beat it may seem a little steep, but you owe it to yourself to stay in this map a while anyway. Would I play it again? Yes, what do you think I'm doing tonight?

Eh?
[You are not allowed to view external links. Register or Login to see them]
(Click to enter portfolio)
×
SajeOne's Groups
SajeOne's Contact & Social LinksSajeOneSajeOneSajeOneseoePortfolio
That map was good until I saw how stupidly placed the the buyable objective items were. I was looking around for items everywhere. It said to find a diamond knife, downstairs there is a knife with a diamond on the grip so I think oh this must me it. I try to grab it and nothing happens, so I go look at a video and I find its a random trigger in a corner. -_- other then that the map was decent but was annoying looking around for 30 minutes for objects that don't exist.