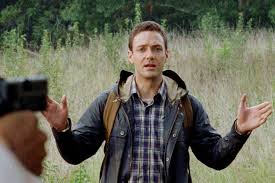 Sorry I am just now getting this review up. Haven't had time to make it this week, but you guys didn't miss much.

Most of the group is still recovering from the loss of Beth, and now Tyreese. Daryl, Sasha, and Noah all seem broken at this point, and they are becoming careless, and being careless in this world will wind up getting you killed.

Nothing really happens during this episode. They are still traveling to Washington, and they wind up spending the night in a barn. Carol keeps trying to get Daryl to open up, but he just wants to be left alone. Noah doesn't want to live anymore since he lost his family. And of course Sasha is still trying to get over Tyreese's death.

There is a couple scenes in here which I really enjoyed. The speech Rick gave in the barn about not giving up. And he finally said a line that is famous in the comic books "We are the Walking Dead". When the zombies overrun the barn and is trying to get in but the group comes together to defend it was also pretty cool. Aaron showing up at the end was also cool to see him. He knows Rick and the group but they don't know him, and he also seems like he just walked out of a mall, the way his clothes are clean and everything.

Overall, I dont know what to think of this episode, it had some great moments, but I feel we could have done without this episode. Most of the time I love every episode, even the bad ones, but this one was just flat out boring. But the previews for next week look amazing.

Like I mention multiple times, I love the comic books, and where the story is headed is amazing. We just have to get through these bad episodes to get to the good stuff.