ItsRay1235RayZFortyTwoMy Portfolio
So, we have a topic for our favourite animes, how about having a topic where each person reviews an anime that person has watched? I'll start with Kill la Kill.
Categories: Action, Comedy, Ecchi, School
Brief: [spoiler]Ryuuko Matoi is a vagrant school girl traveling from place to place searching for clues to the truth behind her father's death—the "woman with the scissor blade." The journey has led Ryuuko to Honnouji Academy.

Honnouji Academy—where an elite group of students is granted superhuman power by their special uniforms called the "Goku uniform." With the power of the uniform, the student body president, Satsuki Kiryuin rules the students with unquestioned power and fear.

Satsuki holds the secret to the "scissor blade" and Ryuuko confronts Satsuki to gain information but... Was their encounter a mere coincidence or fate? The clash between the two will soon consume the whole academy![/spoiler]
What I've liked about it:
- English dub
- Great music
- I've actually formed a huge emotional bond with the main character, first time I've felt like that in a long time
- Art style
- Main plot
- Senketsu (the talking perverted sailor uniform)
- Ep 1's animation
- Unpredictable plot twists
What I didn't like about it:
- Fan service (although, necessary because of the main plot, main theme of this show is clothing; also, there is both female and male fanservice)
- Quite dumb in the first few episodes (although that helps make the plot twists unpredictable) 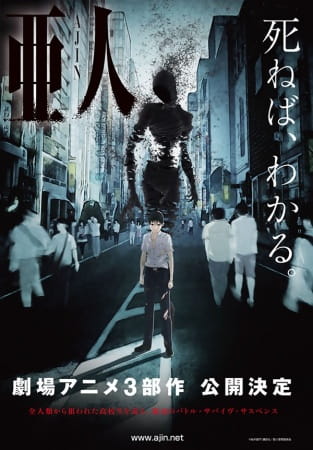 This show is about the not too distant future where there are a specific breed of humans that are indestructible called ajin. No matter what happens to them they won't ever die. (One of them gets burned to ash and survives)

The main character is a young highschool boy, who discovers that he is an ajin one day after he gets cut in half by a semi truck, when the driver falls asleep at the wheel.

Things i like abut it:
-The story was solid and was quite intriguing
-The action was top notch and the animation quality was fantastic
-The main character isn't exactly lovable, but he was interesting enough too make a connection with.
-I really love that his persona has a mind of its own
-Its a movie series so you don't have too devote several hours of your time.
-The first movie leaves off at a fairly reasonable stpping point.
-Reminds the me of tokyo ghoul first season
Things i didn't like
-Reminds me of toko ghoul season 2
-A little bit predictable in certain circumstances
-The character growth was a little too slow for my personal taste.