Created 1905 days ago
by JiffyNoodles 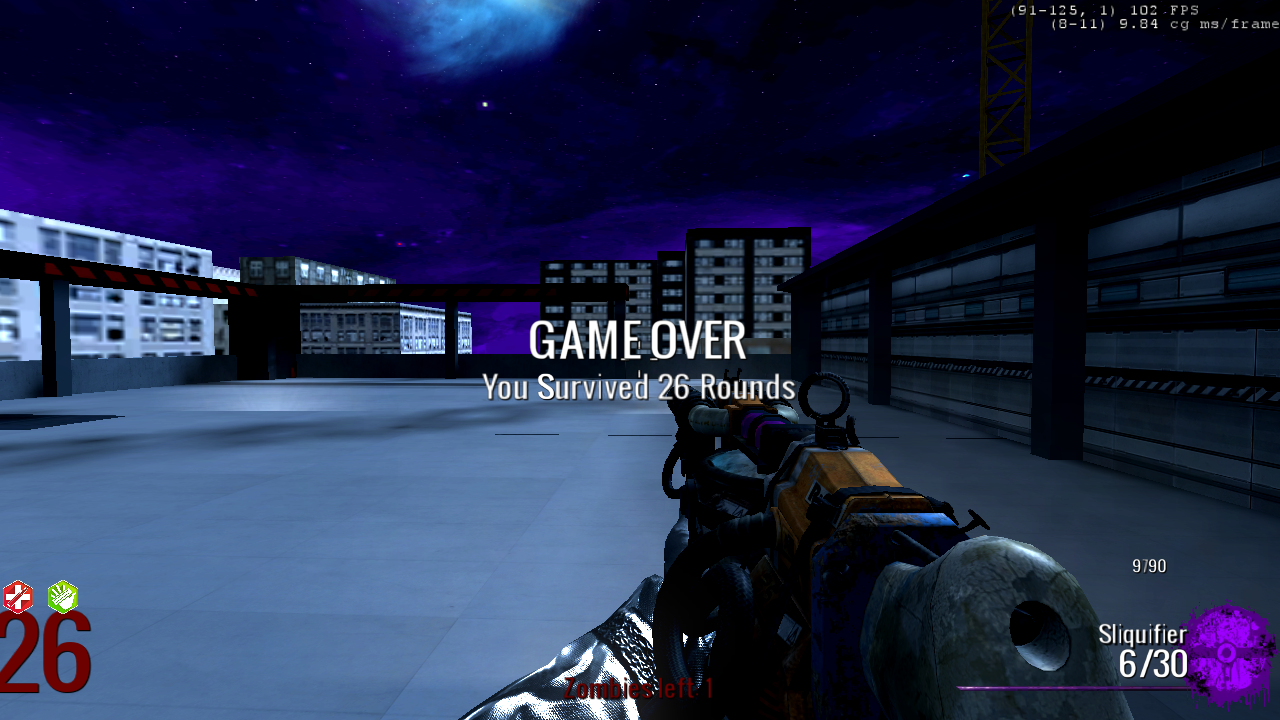 Welcome to Lavender town, a map from a creepy-pasta from a game that I’ve never played. This map was made by Midget Blaster, who was also the creator of the cluster-f**k of a map, Cryogenic, and, true to his roots, has loaded his map full of custom content. This map was released onto UGX-Mods on Halloween (Australian Time) and the traffic was so overwhelming, the initial link just up and left the party. Well, without further ado, let’s get straight into the pros & cons of this map.

Vast Array of Weaponry: This map, like it’s brother Cryogenic, is loaded to the brim with custom content, from models, guns, textures and even the sky are all custom. This is a fun little element of gameplay as you can try out as many guns as you feel inclined to.

Little Side Quest: *MAJOR SPOILER ALERT* this map has a mini adventure hunt within it. For those who haven’t played this map, you have to find a satchel of C4 to blow open a wall, which will reveal an elevator that will allow you to ascend a certain tower. In this tower, you won’t find much, but you will find Stamin-up, a Der Wunderfizz location, the staff upgrade podiums, and the MPD with a purple square in the place of the little ball thingy. But be careful, there is a jumpscare here, if you approach the MPD, you will get jumped. Although this isn’t very rewarding, it is interesting to see that he implemented a little quest on the side.

Verruckt Sprinters: Now, before you get mad at me, hear me out. This is a great feature that he has made plentiful use of. This is because it speeds up the gameplay of zombies, instead of searching for that last zombie, he will come screaming around the corner and before you know it, you will have found him. This is also useful for solo players, as it means that if you stuff up, there’s none of this slow and agonising death, it’s over within a snap, as Verruckt Sprinters are excellent swarmers.

Soul Box is rewarding: This is a major improvement over the Cryogenic (and every other soul box quest) by a long shot, as this offers players the opportunity to earn a free Sliquifier, instead of the overused Ray-Gun & Thundergun. Although these boxes take forever to fill, the reward does speak for itself.

Now, no map is perfect, so let’s get into the cons for this map.

Weapon Balance is out the Window: Unlike cryogenic, the weapon balance was no-where to be seen. For example, the M27, a god of a gun in actual Treyarch zombies (R.I.P Nuketown) was completely useless in this map, as it just took forever to kill anything. Then you look at the ACR, which, although having less reserve ammo, was a wall weapon and was 1 shotting into the 20’s

, like seriously, the balance of the weaponry is nowhere to be found.

Felt rather easy: This shares a trait with Cryogenic, but not in a good way. After you do the soul chest, it’s just a slow grind until you (and your bank) have earned enough money to escape the map. Although it was less open than Cryogenic, it still felt lazily easy as all you had to do was get Jugg, an ACR, and run in a rectangular box inside of the soul box location inside of spawn. You could even go without Jugg, if you felt really adventurous.

Ending is ridiculously high: The ending in Lavender Town is 500,000 points, and this can be achieved the same way that you managed to make the 420,000 points for the Cryogenic ending, you used the bank. But, this takes time, and it feels like a lazy way to extend the gameplay, as you are stuck there until you earn the required points from the bank. It usually takes about 20 rounds or so to earn the 500,000 points from the bank itself, meaning more time you must use to earn the required amount.

File size is incredibly high: This map weighs in at a whopping 817 MB, which is incredibly huge. This map actually requires you to install a patch that allows your World at War to be able to handle the amount of stuff in the map. The biggest custom zombies map I've ever downloaded by a long shot, and I doubt this record will ever be beaten. The reason this is a negative, is because people who might want to play it can't, because either;
a) don't have the space for a map this size
or
b) May not have enough data on their modems/Portable Hotspots to download such a large map

Massachusetts
Date Registered: 29 July 2014
Last active: 1880 days ago
Posts
17
Respect
2Add +1
Forum Rank
Legless Crawler
Primary Group
Member
This is war. Survival is your responsibility.
×
Azado24's Groups
Azado24's Contact & Social LinksAzado24Azado24
I was very interested in this map, but unfortunately my dreams were crushed. The points you mentioned were enough to lean me over to the "pass it by" category. I didn't know what to think, especially since it was based on the creepypasta, but thank you once again for the great information. You are my GO-TO map reviewer JiffyNoodles and take care!