Sorry, just saw this! I'm using the DiegoLogic XmodelExporter tool, same one recommended by the instructions for the conversion rig.
61 days ago

Hey all, long time no see! Recently been trying to port the CoD2 Grease Gun over to BO through the usage of the CoD2 -> TX conversion rig found on modme, as well as Tom's xanim tools, but have been running into some trouble. I seem to be doing everything correctly. I have:
. Correctly bound joints to the model
. Drag on the included viewhands
. Drag the j_gun joint under tag_weapon
. Exported the viewhand joints + 1 weapon mesh as an xmodel to use for exporting the xanims
. Properly selected the tag_torso and tag_cambone hierarchies when exporting the animation

When I drag on a .tanim onto the rig, the animation plays out perfectly. But in game, well, it kinda looks like this: That is horrifying. What am I doing wrong? Has anybody else used this tool before? I see someone on cfgfactory has had success with porting the CoD2 PPS-42, so it's definitely do-able, I just have zero idea what's going wrong in my case.
76 days ago

hey how to cheats in bo1 renaissance guys i cant cheat with /sv_cheats 1 in console any help?

You cannot use console commands/cheats in this mod.
78 days ago

Re: Adding the Engineer Zombie

Re: Wait until all doors are open to start a thread

Thanks again for the help, this should certainly help me in the future. However, with my script, I'm still getting a fatal error whenever I load up the map. I think it may have something to do with my trigger thread. Wanna take a look?


Is it supposed to be called as an array thread at the end of the spawnGraves thread? Like this?

Re: Wait until all doors are open to start a thread

There isn't a notify for when all the doors have been activated, but you can count each time a door is opened and once the count is greater than or equal to the amount of doors in the world then all doors have been opened.

You can do the same thing for determining if all zones are active, but instead checking if there is a zone that is not active like this

PS: I haven't done much with zones nor have i tested this so it may not be the exact way to reference the zones but the concept is correct

This is fantastic man, thank you so much! However, now my game is crashing on load. Any chance you can take a look at what I have so far and see what I'm doing wrong?


With the script you provided before, I kept getting a syntax error due to this line:

Shouldn't there be an extra bracket after the variable so that it reads like this?
1082 days ago

Re: Adding the Engineer Zombie

Wait until all doors are open to start a thread

Hey, so with an easter egg I'm trying to script, I'm trying to get it the script to wait until all doors/areas on the map are open until it begins. I'm pretty sure it's supposed to be set as a flag_wait(); but I'm not exactly sure what to put for what it should be waiting for. For example, I tried doing:
Which is obviously quite wrong, but it should give you an idea as to what I mean by this. Anybody know how I could fix this? Thanks!
1084 days ago

Hey everyone! So as part of my BO mod, I'm hoping to add the Engineer Zombie boss to Kino Der Toten, as what was at one point considered for the map. However, I'm running into trouble with getting him to actually spawn in on the level. Let me try to run down everything I've done so far:

I got the "boss_zombie_spawner" targetname from the ai_boss.gsc script, which has two lines of code that read:

I'm kinda new with setting up spawn points via gsc files, so I might have done this part wrong. Surely I can just put all of the spawn points together in one function like this?


- In zombie_theater.gsc, I've added this line:
Under this:

I got this from another line of code from the ai_boss.gsc, which reads:

The boss_zombie_default_enter_level thread appears as follows:

I'm probably wrong here, but I was assuming that I could simply designate a round to this function as seen above, where I'm trying to get the boss to spawn on round three.

- Before, I also tried adding this:

Directly under the level.boss_zombie_enter round = 3 line in zombie_theater.gsc, but what that did was cause the spawn music to continuously play over and over again during the match. So I'm guessing that was totally wrong

Aside from that, I've got all the sounds, animations, models, and character files set up just fine. Any help would be greatly appreciated, thank you!!
1085 days ago

When installing, I get this error:

Re: Conversion Rig Error for Maya

What viewhands are you talking about? The conversion rig itself, or viewhands you import with the gun?
If you have a link to the topic i can look at it, but i can assure you it's working since me and a lot of other people have used it. You just need to be carefull with the joints you select to export etc cause there's 2 set's of viewhands in there basicly. 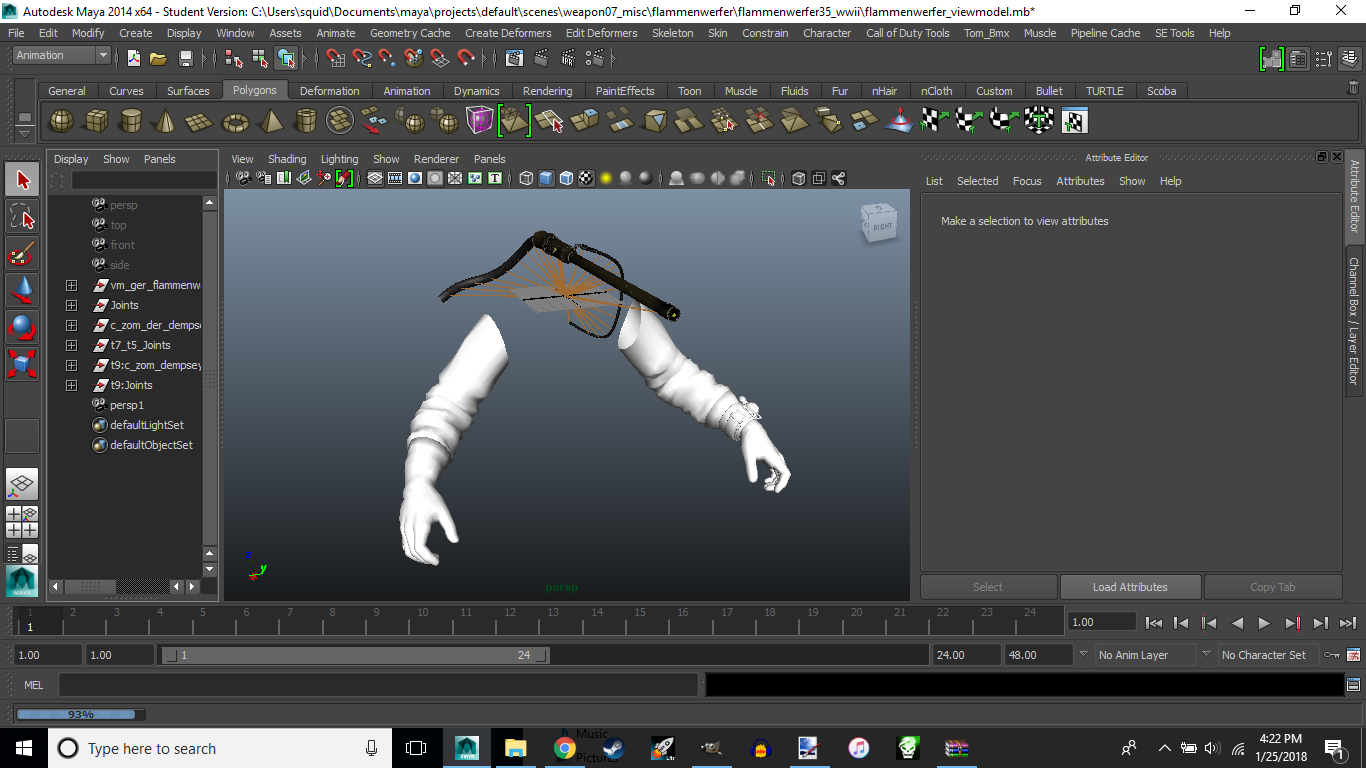 Re: Conversion Rig Error for Maya

I've only used it once a while ago, but i'm fairly sure you dont need to import viewhands. The waw-bones are allready there. Re-read the instructions ( i cant find the topic on modme, but i'm 90% sure )

Sorry, I should have mentioned that when i get all of the errors, none of the joints are exported with the viewhands.
1093 days ago

Hey, so I'm trying to port some BO3+ weapons down to WAW/BO, and I'm trying to use Sanchez's t5-t7 conversion rig off of the modme site. However, when I import the viewhands model into Maya, I get a whole bunch of errors saying something like: "The parentConstraint 'j_ring_le_0_parentConstraint1'  has no 'tg[0].tis' attribute" and whatnot. What is going on here? How do I fix this? I'm using Maya 2014 64x, would it make a difference if I used a different version? Thanks to anyone that can help me.
1094 days ago

Hello again to the forum, long time no see! I'm hard at work on an expansive 10-map mod for Black Ops Zombies, and one of the many features will be the inclusion of the Amm-O-Matic perk. I'm looking to have it function similarly to the Alchemical Antithesis gum from BO3, where every 50 points awards the player with one bullet in reserve. However, I don't want to make it so that the player doesn't earn any points, it'll just take a little more to earn the bullet. I've tried using an edited version of Lilrobot's script for the gum (which he said is okay to use, just as long as credit is given), which is written in the _zombiemode_score.gsc file, but it didn't work. Check out what I tried:

Anybody know how I can fix this? The new BO1 section seems a little barren at the moment, so hopefully someone will at least see this lol. Thanks!
1105 days ago

question: what does amm-o-matic do?

Every kill gives you back one bullet in reserve. Works best with sniper rifles and shotguns. Thanks for playing!
1196 days ago
1
2 3 ... 16 ❱