This might be a dumb question but did you try doing "Verify integrity of tools files" inside the properties menu on steam?

If you didn't already do it, this should fix any missing/broken files from your installation then verify that it is all there.

Other than that I can't think of anything else besides reinstalling, although since it is such a big download I would try to figure out something else first unless you have no problem downloading over 100gb again lol
1575 days ago

Where would I find the brushes? Like brush models?

Basically everything you level is made of so structural and detail brushes, like a brick wall would be a brush/patch. If those have too many verts then you will get errors. I assume brush models will also be considered the same thing.

Re: Adding the keepers sword to a custom map and existing maps

Hi guys , I have been playing a lot of SOE and I like the keepers sword very much , I have started to create a map for BO3 and I was wondering if anyone knew where to start adding the sword to custom maps and also original maps ( the giant ) as a replacement for the annihilator .

I have been informed I will have to port the weapon but I am not sure how I would start to port a weapon into the same game . I tried changing the starting weapon to the glaive_keeper_0 but it did not work .

Note: I'm not very experienced with this so don't follow everything I say, just saying what I think is the right way to do it

Well you would port just like any other game, rip the assets from the map with wraith then get them into ape. Then you would most likely need to make your own scripts for the weapon unless they are included in the assets which they probably aren't, that is probably the hardest part. Someone may have already made the scripts but I haven't seen them anywhere

The main reason you would need to do all this is because they didn't actually include all the weapons in the mod tools, so we don't have access to those weapons
1576 days ago

Thank you for this tutorial!
I've been looking for ways to color grade the game for a while now.

Is it also possible to actually import LUTs?
I have a sweet collection of LUTs I usually use inside premiere.
Thanks!

Unless you can figure out how to convert it to the type of LUT in a image file that bo3 uses then probably not, then again I may be wrong since I've never used premiere or LUTs before so don't take my word for it
1576 days ago

But from the look of it that error would mean that one of your brushes has too many verts/cuts in it. Not sure if there is an easy way to find it but try to look for anything that seems like it has too much then reduce it as much as possible without losing detail
1577 days ago

Do you mean like the double door models where there is a left side and right side?

Anyways, if you want to easily mirror something pretty sure there is a button near the top bar of radiant that looks like this:
X|X or Y|Y or Z|Z (Except it is a icon, not text)

Bevel/Curve patch texture not lining up

Seriously no matter what settings I use inside the surface inspector it doesn't line up with the other textures and has seams, if I middle click the texture one side of the patch gets all stretched. I have been trying to figure this out for like 40 minutes and am getting annoyed lol

Texture Not Lining Up: 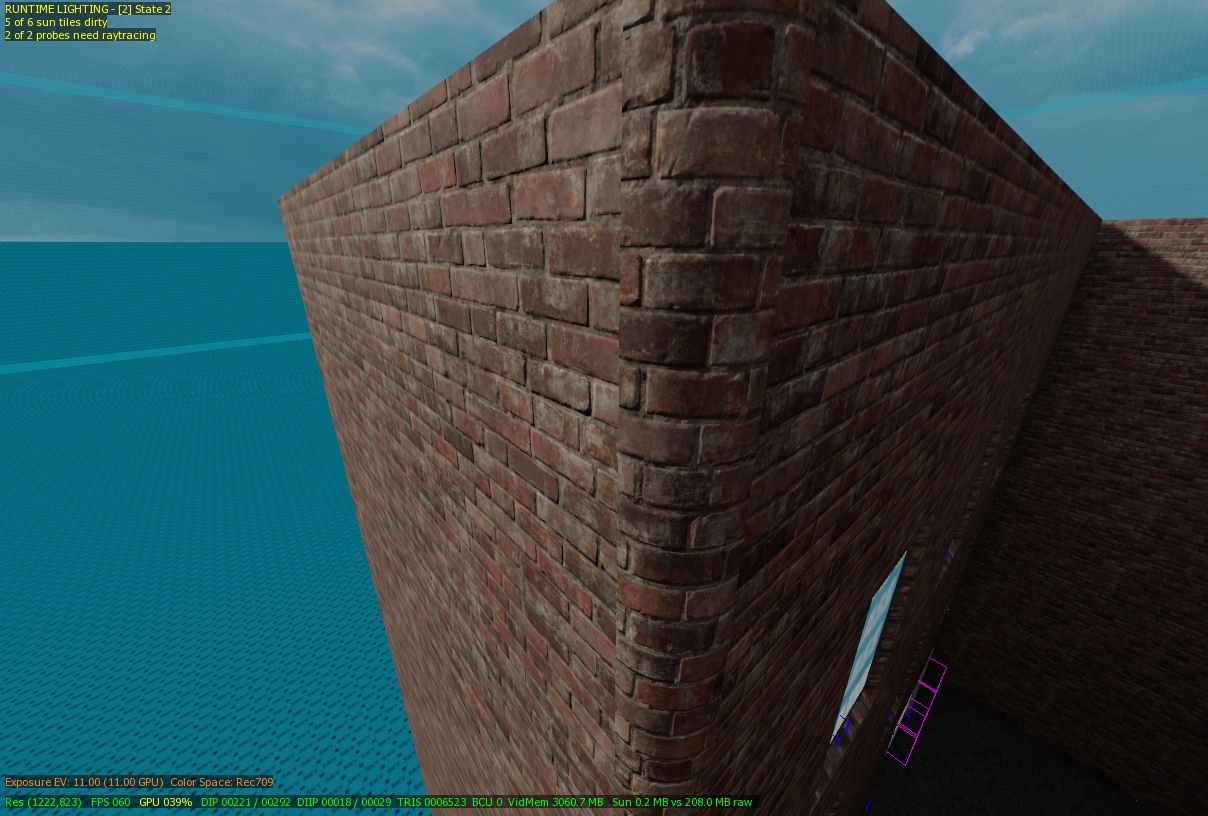 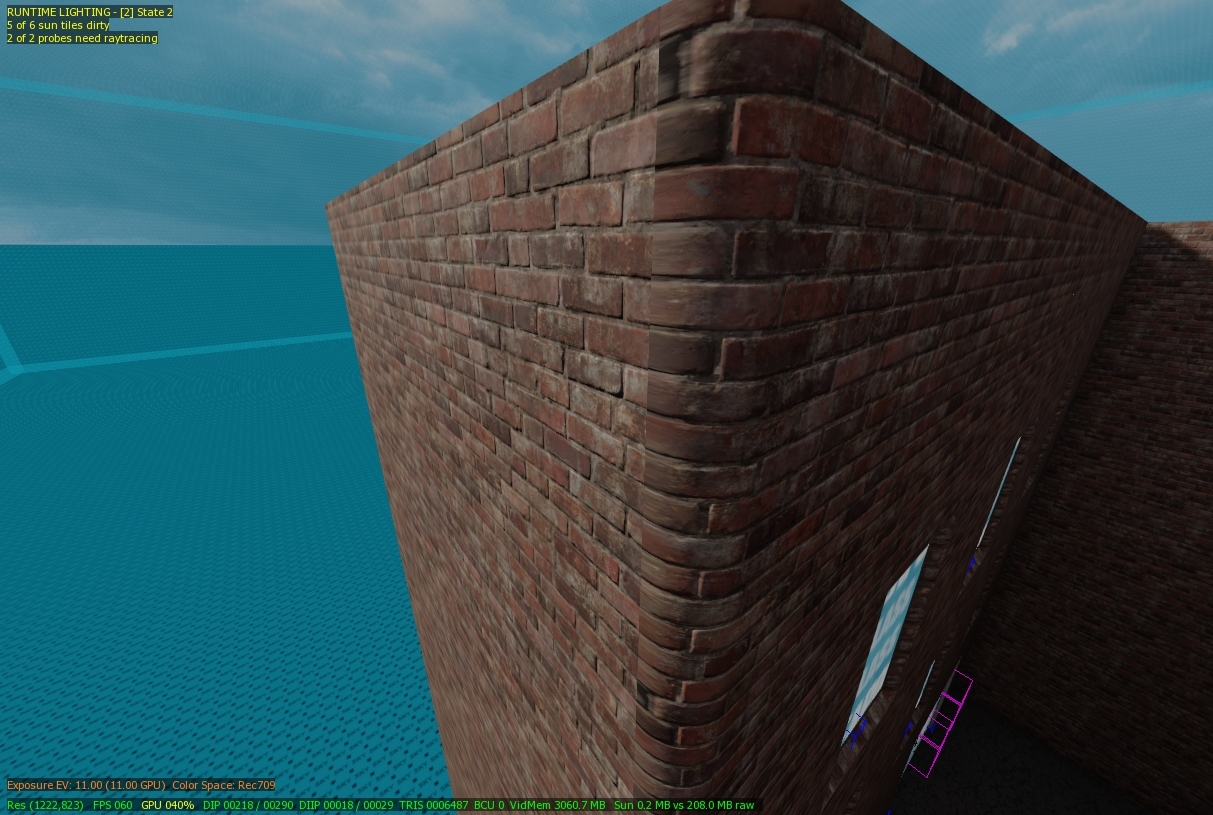 Re: Skybox light bleed and lights not working.

Not sure about how to fix the lights not working, as for bleeding...

There isn't really any way to "fix" it entirely, just make a second brush near the part of the wall the player can't see a few units away then give it the "Caulk Shadow" texture and keep messing around with the placement until it blocks all the light bleeding through.

I have tried almost everything, don't say I didn't save I have plently of times I just compile it and the changes I made are not even there.
EX if I remove something save then compile it would still be there.
Please help ive been working on this map for so long and don't want to restart

Make sure you did it right.

That should work, no reason why it wouldn't. Only other reason might be that you are running the wrong map somehow? Make sure you have the right one/version selected
1579 days ago

As you probably know you need to reduce structural brushes.

I would recommend either doing what you tried to do and making some brushes into details, or learn how to use "portals".
1579 days ago

If you still haven't figured it out here is a tutorial.

Someone on twitter said this "Likely the use of cqb's I believe their called. Basically color correcting reflection probes. Should be in entity browser".

Re: Shadows of Evil Portals

First of all, thank you for this script. But it seems I am doing something wrong.
Maybe I am forgeting something but this is my steps:

After this I am trying to walk through my trigger, and nothing happens. I did something wrong?
Sorry for being stupid, but I am rather new to this whole scripting thing.

Make sure you are calling the init script in your main function:
1759 days ago

Can't get my map to run anymore. Yes I've tried backups, creating a new map and transferring scripts and map itself.. When I launch it through both the mod tools and black ops 3 it gives me an infinite black loading screen, left it on even over night no crashing, no errors when compiling. Nothing. I've done a lot of work on this map and even testing multiple updates on it with friends on the workshop before Im going to release it, so it has been working great up until now. I've deleted any recent new scripts I've added and that hasnt helped either. I've had this problem one before but a backup solved it, nothing will solve it this time, help!

If there is an infinite black screen then it probably is a script causing the map to crash. Just because the game it self doesn't crash doesn't mean your map didn't.

This is normally caused by scripting errors such as if you accidentally put a print string in a while loop or something so that it causes the game to crash.

If you don't have any custom scripts I can't help you there, I haven't personally seen anyone get this for a different reason.
1762 days ago

I reached the max maps 150.  Guess I have to wait for the ugx launcher to be released.