I played solo, Classic mode, got to round 15 before dying. Whenever trying to play Co-op, myself and friends have been receiving the following error message, after starting. 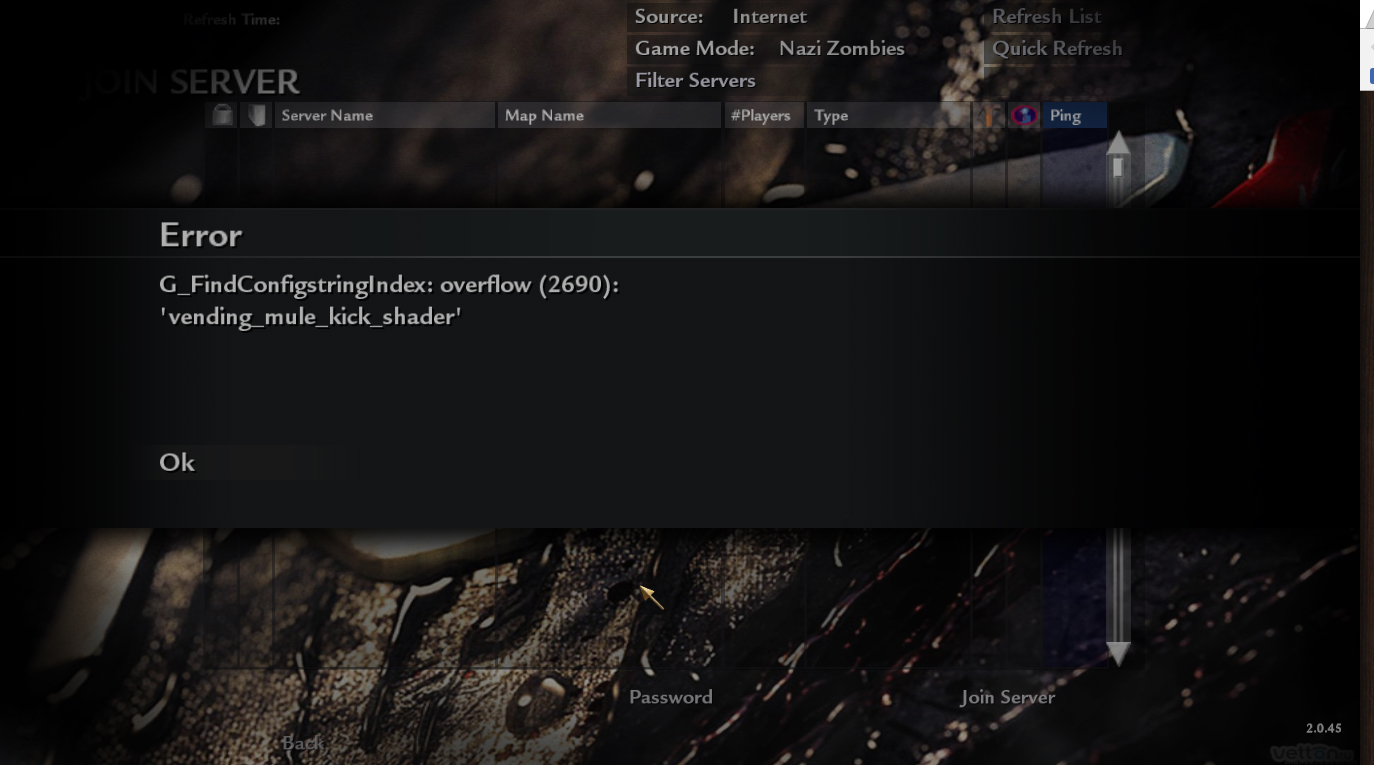 Any possible fix for this?

Thank you for creating such a cool and challenging map.
892 days ago

Incredible map! I only played a few rounds to test it out, I got to the mystery box no problem. I will play again later with friends. Thank you so much for putting so much work into this map. I look forward to exploring it further.
1430 days ago

Thank you SO much for releasing this. I just absolutely LOVE having Panzers in maps. Every time I hear that 'incoming_alarm', I get so hyped and at the same time worried that he's going to spawn in right next to me. LOL.

I can not wait to see a PANZER filled map released by you for BO3.

So you arent going to suggest anything that I can to to stop it? I played older versions of the map and they worked perfectly.

If you REALLY want to play the most recent version of this incredible map, I'd suggest removing ALL other maps and files in your 'mods' folder, then install this map, it should play just fine.

If that doesn't work. Reinstall WAW, then T4M, and ONLY install this map. Then when you want to play other maps, add them 1 at a time back into your 'mods' folder. This procedure worked for me when I had a problem playing a different map. For me, this map/latest version played just fine! It's personally one of my favorites btw.

Very fun map. Love all the BO3 elements to it.

Only bug I have to report, is falling off the map in the bottom area where ending is located. Other than that, it played perfectly.

Oh, maybe I missed something, but the zombies never ran, they were always walkers, which isn't very challenging at all. Any chance of progressively making them faster?

Thanks for creating and sharing the map.
1486 days ago

How on Earth do you get the PPSH on the wall, it seems impossible.

There are 2 ways that I have done it.

1. Use the Paralyzer. Shoot the ground and jump, this will elevate you to the PPSH.
2. Place the Water Launcher just below the PPSH, use it to elevate you to it.

Not sure if there are other ways to get to it, if any one knows of any, please post.

Love the GORILLA! Great job with the map. Lots of fun.
1538 days ago

Worked for me, when I was playing

I had a game earlier in which QR worked for me 3 times in a row. Also same game, when I was being pulled in by a panzer, thanks to the Ray Gun, I was able to escape his clutch. Any other gun where I tried to get away, failed.
1538 days ago

Love the map. My only issues, once a Panzer grabs you, there's no way to get away from him as he's pulling you in. You can usually shoot his claw and he will drop you, doesn't seem to work on this map. Another big thing, is QR in solo works sometimes. If these 2 things could be fixed, would be greatly appreciated.

I'm sure there are videos out there already.

Surprisingly there are no videos on YouTube showing the exact steps that need to be taken. Not even the RelaxingEnd video shows what needs to be done.
1539 days ago

If possible, could we get private messaged the full and complete steps to the EE. A list of doing what does what?

It would be a tremendous help.

Just did a quick play-through to round 8, first and foremost, LOVE THE SOUNDS! Great job. I look forward to playing it further.
1542 days ago

Re: [RELEASE] Clinic Of Evil

I proudly donated to have early access to this incredible map!

Speaking as an adult with my own money, I totally have no problem with paying a SMALL donation for an advanced copy a map, months before it is officially released to the public. It of course would have to be from a mapper already established, or if from a new mapper (such as "sethnorris'), show a video detailing the map properly.

As tight as money may be for me, if a new map was released by a top mapper such as steviewonder87, ConvictioNDR, HitmanVere, AweseomePieMan, or from the many others out there, I would spend my last $1.15 to be able to play one of their NEW maps! I'd be much more inclined to pay-to-play, then to send a donation after I had already downloaded a map for free. Just saying.

I know this opinion may not be popular with a lot of people out there, especially all the kids without their own money to spend, but I do feel the mappers should get something in return for all the hard work they put in to creating these amazing maps.

I actually wish there were tiers here, where the more established mappers, the ones making the more premier maps, would be given a class, in which to download their map, it would cost $1.15

This would help motivate those mappers who haven't made it to this level (tier) to keep getting better at making maps, so their peers (higher level mappers) would vote them in to the upper tier, so they could also receive $1.15 per download.

Made it to 25 today, pretty good. Got the gravity spikes and did the little timed puzzle in red afterlife. I'm pretty much stumped at this point on what to do. Anyone got any ideas?

What exactly do you have to do to get the Gravity Spikes, if you don't mind saying.

Easily beat it on 1st try, due to so many camping spots.

Incredible looking map. LOVE IT! Brought back so many memories.

I look forward to trying Nightmare and Fun modes. Thank you for creating and sharing the map with the community.
1561 days ago
1
2 3 ... 8 ❱