I've been just trying to learn APE, and every single time I try to add a normal map to the material I'm modding, APE crashes, and then keeps crashing until I delete the texture from the texture_assets folder. EVENTUALLY after more crashes it starts working again.

I made the normal map from this site, if anyone's wondering

EDIT: I just figured out that literally selecting any material crashes APE. What a quality tool by Treyarch

I've been stuck with this problem for awhile and it's driven me mad.

There is one zone in my small map that I can't enter. The zone has two doors leading into it. However, neither of the doors work. When I walk up to one of them, the text that tells you to buy the door for a certain cost simply doesn't appear, and pressing F doesn't work at all.

1. I've checked that the zones are properly named, and the adjacent zones in the map GSC file are correct as well. I've also made sure that the zone volumes are info_volumes, touching each other, and have target, targetname, and script_noteworthy KVPs, so I don't think it's the zone volumes causing the problem.

2. The triggers for both doors are both trigger_use, and have the right target, script_flag, and targetname (zombie_ debris), and all the other options are default. The trigger is stretched so it extends past both sides of the debris models and clip (so you can open it up from either side, which is how I think it works). I don't think I messed this up, but I get the feeling that this is the part causing me problems.

3. The clip is a script brushmodel with the targetname and script_noteworthy KVPs, extended to cover the models.

4. Finally, the small rocks (which are the models acting as the debris that I want to move) are script_models with the targetname and target KVPs.

5. I have indeed added the script_structs with the approriate targetname.

I simply have no idea how the door just stopped working entirely, as I have been essentially copying my doors over, and I've been checking this over and again to make sure I got the KVPs right.

Any help would be massively appreciated!

EDIT: Simply deleting both doors and remaking the door carefully while watching a tutorial fixed it. I'm not sure what went wrong, but probably some stupid typo.
708 days ago

EDIT: Also, I assume most doors come from models right?
1449 days ago

Hey everyone! Just wondering if I'm doing something wrong.  I can't seem to find any door textures in the "Texture" window.   In addition, I just seem to have a lot less textures to work with overall as opposed to CoD:WaW.  I set it to "Usage: Door" and "All" at the top of the Textures window.  However, nothing shows up.  The only way I could get a door is by going to script > models and using one of the very limited door models there.  Is there a way I can get more textures besides importing? If I buy DLC zombie maps do I get more textures? Or am I just stupid?  ???
1450 days ago

For Blacks Ops 3. Are all the tutorials and stuff I need to start mapping on BO3 on this website?

Cool, cool. I'm assuming all the tutorials I'll need (or links to them) are here?

Black Ops 3 or World at War?

Hey everyone! I've returned from my hibernation and have realized that now there is mapping for World at War AND Black Ops 3.  Seeing as I abandoned my first map, should I switch over to Black Ops 3 modding or stay with World at War? Which one has more support and popularity? Thanks!

Everything is FINALLY working! No errors, but there is one bug:

When I pack-a-punch the Colt M1911, and turn it into the Mustang & Sally, I can get an INFINITE amount of guns.
I suspect that maybe the game is not recognizing the Mustang & Sally as a weapon or something. IDK. Any help is appreciated.

EDIT: Realized that this should probably be moved to the actual post with the BO2 guns 0-o. Woops
1812 days ago

I knew I had done something so obviously wrong!

Everything was fine, but I forgot I had to call the function under maps\_zombiemode::main();

Okay, both the door and trigger have no KVPs except for targetnames, and I replaced my script with what deadpool's got.

EDIT: Also, I moved the trigger to inside the play area, and made it a large sheet dividing a room in half, so I just shoot in it and boom.
1822 days ago

It's still not working!

does the trigger need to be inside the play area?

Is there anything else wrong?
1822 days ago

Hmmm. I'm confused. Why is it not working? 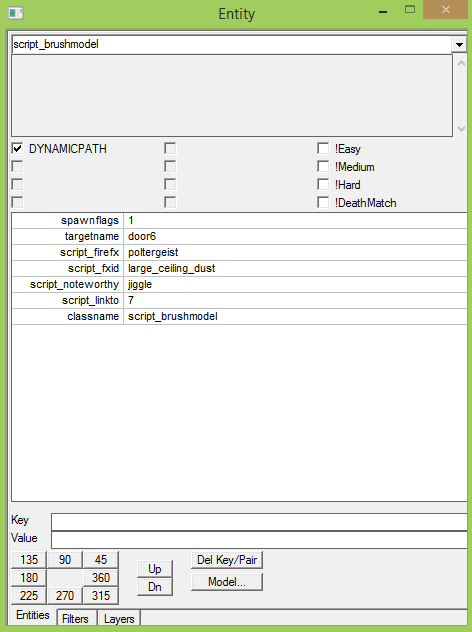 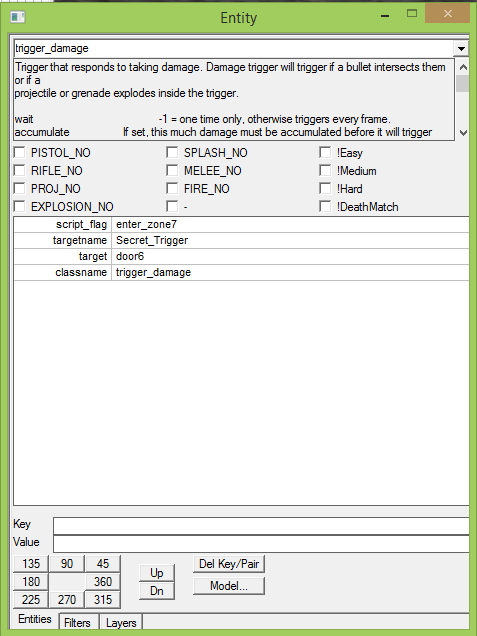 Code that is in my map's .gsc:

Opening a door by shooting a trigger

So, as the title says, I'm trying to open a door by shooting a trigger.  So I made a door with the regular kvps that all doors have with the targetname door6, and made a trigger_damage as well with the targetname "Secret_Trigger" and then in my maps .gsc I came up with my first (horrible) script!


I've been reading all I can on scripting, and I THINK most of this makes sense. I just don't know what function I should use to open the door. Would ent delete(); work instead of door_open(door6, player);? Now that I think of it, doesn't self delete(); refer to the Entity, which is the door? 0-o How would I correct this script?

Well, I'll be honest, I kept fiddling around trying to add Harry's perks, but I kept failing and getting stupid errors.
I was a bit too embarrased to admit that.