Changing background image of the menu

I had this before but forgot what/where in which menufile I need to edit, ive made the material and that's all fine, but where to go to change background of the menu?
1428 days ago

ELO Sight reticle not working outside of Devmode?

So I ported the ELO sight from Bo3 onto my Drakon, and used the standard assman settings for a reflex reticle, and it works fine in devmode when I launch my map through Launcher, but when I launch the map through WaW in normal mode, the reticle doesn't show? no missing image, no buggy look or anything, just no reticle on ADS, why could this be?
All the correct images are in the mod and working btw
1431 days ago

Playing a looping ambient sound for all players?

Right, I made an ambient sound I wanna loop for all players the whole length of the match just in the background, I had this working in NDU:R, but I cannot get it to work in my current map, so what would be the best way to do this?
1432 days ago

So I tried to remove playerquotes by commenting some calls to some dlc_vox csv's, and I'm now getting freezes in game whenever a quote would have played, is there a proper way to remove quotes or have I done something wrong?
1445 days ago

So whenever I try and run my map Co Op with any number of players, we get this error before we even spawn:

Anyone have any idea of what this is or how to fix, its only co op?
Ive been told to remove HUD images, but I already have plenty in use that I cant remove:
0-9 numbers for Ammo counter, 0-9 numbers for Round Counter, 10 perk shaders, any for HUD + grenades, any stock ones
None of the counters can be removed.
Any idea what to do to fix this?
1445 days ago

So here is the issue, I have mini "pools" of water around the map, done by either a water patch with a clip_water brush under it, or a clip brush with a water texture on the top face, and both result in the issue, the patches that make up the pool don't light up correctly, or light up at all it seems, as the image shows:

Weird thing is, the river made up of a patch running through the middle of the map does not cause the issue to the brushes that is in contact with, only my stationary pools of water have the issue.
Any idea on how to fix this without simply removing the water?
1461 days ago

Player randomly swims at one point in the map?

So I have some stairs going down to a new underground room in the update I'm working on for my map, and for some reason walking down them causes the player to lose his gun and swim for a couple seconds at one point on the stairs, yet there is no clip/brush/patch or anything there in Radiant that could cause this? Any Explanation?
It is just at one specific point on the map
1468 days ago

What do we all think will be the first BO3 Custom Zombies map?

And also, does this come with the possibility of more people being added to the Alpha team?
They said "first round" of Alpha tools in their initial tweet, and that went to mainly CoD4 and MP mappers, likely because the Alpha only had MP assets then, with Zombies about to be supported, is there possibility of some of us Zombie mappers being invited into the Alpha?
1525 days ago

Got bored and decided to make myself a set of new shaders for when BO3 tools come around, and they turned out pretty nice.
Went for a dark, dirty and gritty look to them, and I decided to put them here if anybody wants to use them in WaW 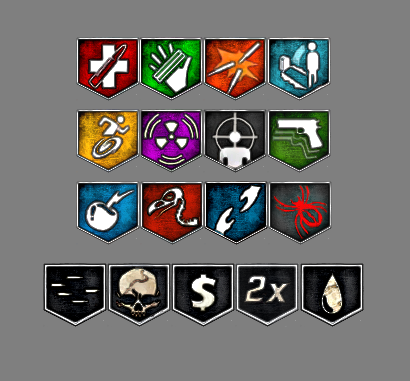 The image shows all of the included shaders
NOTE: They come in .TGA format only, they will need converting to WaW through asset manager, there are plenty of tutorials around, but the material type needs to be 2D, surface type none, and notile set (to avoid the lines that show at the bottom of some shaders)
They then need naming accordingly to whichever names your perks/powerups script requires
This is usually in the form of specialty_PERKNAME_shader
If you look in your perk script you will be able to see what shader names are needed, simple enough
1537 days ago

Things you'd like to do with Bo3 Mod Tools

Now we've had our first look at the tools and their capabilities, we can start to draft ideas of what could be possible with them, so I thought id make a thread where people could share their ideas, however big or small, of what they'd like to do/see in a BO3 Custom map.

A couple of mine are:
Re-convert the Powerup models without LOD's so when they start flashing they don't appear super low res for a couple seconds, load in high res, then disappear again.

Make the Apothicon Servant upgradable, but reduce its ammo count to 1/14 and not 1/24, as that's way too OP

Re-Draw the wallchalk textures, so they fit the contours of the guns better, rather than being a rough outline they are atm (also the HVK, Sheiva and ICR all use the same chalk

The reason is Sliding you can do anywhere at no inconvenience, where Dolphin Diving and using Flopper was very situational in when and where you could use it, but having Sliding do something that damages zombies, you can just run a train round and keep sliding, would be very abusable.
1573 days ago

Any PS4 players here mind sharing some knowledge of ZNS to an xbox player?

Ive been watching a lot of videos, and reading up on the map, its looking pretty damn good, although it has a lot of negative criticisms.

But I have several questions:

1: Do the Perk Slot Bottle drops from the Skull challenge affect the whole team?

2: Can that challenge be repeated to get more perk slots?

3: Does the free Widows Wine override the 4 perk limit?

4: Ive read that the Perk Slot drops can come from reward plants and Im Feelin Lucky, is this true?

6: And how does Temporal Gift work in that respect, will you continue to have Insta Kill after it runs out for the rest of the team for example?

7: Does Secret Shopper allow ammo purchasing for Wonder Weapons? (Ray Gun, Wunderwaffe and Apothican Servant specifically, I checked YT for gameplay of this Gum but only DE gameplay was out, and the guy could NOT buy ammo for his Bow, but im hopeful this is because Bows don't have a "clip" and buying wall ammo uses the current clip to work out how much ammo to give, as the clip isn't filled, so im hoping they haven't outright ruled out WW's from this gum)

Most of these questions ive trawled YT for the answer, but have had no luck, people just make videos talking about the damn Gums rather than showing how they work.
1574 days ago

Brushes showing invisible in game, can still be shot and walked on?

The title pretty much explains my whole issue, are there any possible causes of this?
Its a certain set of brushes from 2 prefabs I placed, then stamped, even though the same prefab was used 3 times prior in the map fine

EDIT:
Its fixed, Ray suggested the lightmaps in Chat, and they were the issue.
If a mod wants to delete this go ahead
1581 days ago

What are some decent LOD distances to use for a static forklift model, used simply for detail?
I have 4 LODs if that's significant
1589 days ago

How to use Colour detail, or Alpha, to apply colour to guns where it should be?

So im converting the images for the MW2 M1014, and as we know parts of it are an olive drab green colour.
Well, the colour map for the gun comes with those bits in white, and the green colour comes as an 8x8 colour map.
Now how do I get the green to apply to the bits where it should be on the gun?
When using colour detail map in Assman, it turns it green, but the rest of the gun goes black.
Ive been told its to do with the images Alpha channel.
Now when I use the image WITH alpha, I get the correct green, but the rest of the gun goes black.
Also with Alpha, its impossible to make normal/cosine/spec maps as 80% of the image shows as blank...
But without Alpha, the green does not show.

So the question is, do I somehow work magic with Assman to get the green to show, but still allow me to remove Alpha to make nor/cos/spec maps, or do I somehow add the colour to the Alpha of the image, or the image in image editing software (bear in mind I don't have PS, only GIMP or Paint.net)
1590 days ago

Best way to light inside areas?

So im mapping a completely enclosed building, and everything is dark under my current settings, some models are lit up though, yet the floor is pitch black, I can place lights, and they light up a tiny area of floor, increasing their radius and intensity obviously makes them light up more,

But regardless of what I try, I always get pitch black areas in game, or it just looks completely unrealistic with tiny areas being really bright and the rest pitch black.

So whats the best way to do lighting? several large radius lights and high intensity around the map?
Or just cover the playable area of stock lights near the floor so it's lit up.

Also whats a good setting for the "ambient" worldspawn setting, 0.10 is what I had in previous maps and it look decent, but in this map it needs at least 0.5 for the floor to be visible in some places.

I know this is very hard to word, but if any of the people who manage to light indoor areas to look decent could help me, itd be massively appreciated