the reason why it may say PS4 instead of Xbox One, is many rumors are suggest the DLC deal has gone to Sony, and thus they are getting the promotion, uploading trailers first, their name put before everything else. I cant find a better quality pic than that.

I Hope you are correct, I found this from charlie intel about the possibility of a deal with sony, although people in the comments [of the aritcle are making claims that they have said this before and have been wrong. http://charlieintel.com/2015/04/23/rumor-call-of-duty-exclusivity-deal-moving-over-to-playstation/
Double Post Merge: April 26, 2015, 01:04:29 am
Quote from: timelordalex on April 25, 2015, 02:21:24 pm

official box art leaked (for Xbox One, PS4 and PC - nothing for last gen)

The gun he is holding in his left hand says sally

Double Post Merge: April 26, 2015, 01:19:40 amOk so i did a little research on this sevenK (who made this concept art.) Here is a screenshot from a tweet he made where he basically stated that its not real and only concept/fan art. 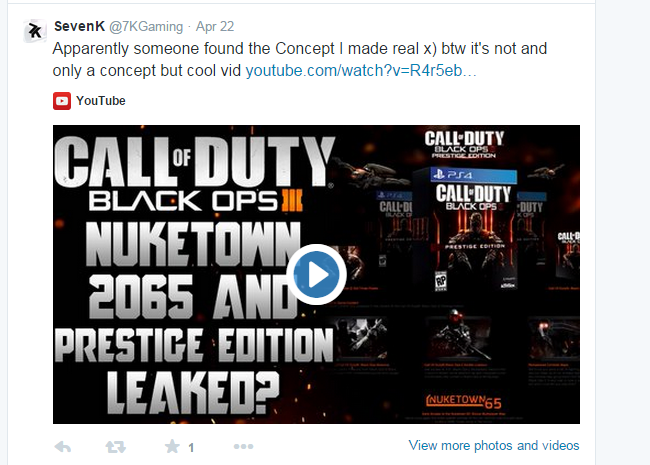 This is in the map also...but I didn't want everyone to know this

maybe at some point over the last 4 years it was changed in one of the 3 patches...

Not trying to argue here but Moon is my favorite map, I still play it ALL the time and know all the ins and outs of this map.  The only way to get a free perk from a QED is to throw it at a perk machine. You wont see a green perk bottle or anything just some white looking bubbles floating up in your view but even this is extremely rare.
1862 days ago

Have any of you guys read the abundance of leaks today? and thoughts on possibly every zombie map being remastered and put on BO3?

I wouldn't get your hopes up on this. I'm no expert but this just seems poorly put together. Like the Purple guy said they wouldn't put a PS4 game case showcasing the picture. I would love to be proved wrong in this case but I don't think I will be.

With all these awesome legitimate leaks we have been getting over the past day it wouldn't surprise me a bit to see some people trolling.

Where did you obtain this photo?
1863 days ago

HaHa, good job m8 downloading now, will let you know my thoughts on it when im done with my run through. Looks good and Love a map with 8 perks.  gg
1869 days ago

Thanks Tyler, Going to give this a run through soon.

1. How do I pack-a-punch the One Inch Punch?  I tried using them then pressing 'F' (the key I have bound to action) while the weapon was displayed as 'One Inch Punch and nothing happened.

I have a video out for this, Here is a link to the ugx topic. http://ugx-mods.com/forum/index.php?topic=6081.0 Just watch the first video and it will explain step by step how to do that. The upgraded 1 inch punch is the solo easter egg reward so there are several steps involved.

Suggestions
Can you guys please make it easier on the boss rounds, like on die rise where only two would spawn at a time?
can you also make them teleport alot less, you cannot shoot to get a free perk. and I never got past the boss rounds because of not being able to see them.

Wall Buy shotguns work great on these guys, camp outside with your back to a wall, you can see them comming for miles. Also try some point whoring with the starting pistol you can easily get the 1 inch punch before the first wave of these guys show up, givin you get a max ammo and double points at least once.
1877 days ago

Also, to the people posting about G-Spawn:  Please tell me what you were doing in game when it happened, I cant fix it if people just complain that they got G-Spawn and don't give me any other information to go off of.

Not sure if it makes a difference but between 4 players we had 3-M&S,  1-MarkII, 2-ak74u2, upgraded RPK & Galil, Gersh, QED and hunter killer shark thingy, as well as everyone had claymores and at some point 2 players had bought the sickle. I'm not positive but I don't remember seeing anyone stack claymores.

Don't know if any of this helped or not but its the best I could explain/remember of our game when it happened.

Updates are looking really awesome Vinnyz. Glad to see this didnt bite the dust after all, keep up the great work man.
1883 days ago

Nice job man! I've never tried the chaos mode on this map. after watching this I might give it a go.
1886 days ago

This is Looking so awesome guys! I'm one of a dying breed who actually enjoys playing Nuketown, but of course felt it was lacking in size so seeing this just makes my day! So Spot on guys! If I didnt know better I would claim the screen shots were taken from the OG Nuketown thats how awesomly precise you guys are. For sure will be checking this thread often for updates. Keep up the awesome work gentlemen.

Will you keep the perk system the same? Meaning randomized perk spawns through the game progressions?
1887 days ago

Whats up everyone. Back again this time on the map Terminus.
Covering everything from turning the power on to how to complete the end game easter egg
www.youtube.com/watch?v=QaSJGdR5YJA

Another favorite on the list for certain is Cheese Cube Unlimited

This map ranks high on top of the list for the originality and the challenge that this map has. This definitely is not your average zombie map with typical zombie gameplay but still holds the core value that us zombie slayers expect. This map isn't for everyone but for me it holds a permanent residence in my mods folder I don't think I would ever get tired of this map.

Another one of my most favorite maps would have to be Christmas Warehouse.

This map has some great side quests that is very innovative to the custom scene. It really has it all from Custom knitted gun camo, to baby panzers that to this day make me die laughing every time I play. The map it self plays great. what i mean by that is some simple aspects such as knifing is very crisp and fluent and thank god they were able to do somehthing about those dreaded world at war hugging zombies. Great and trivial easter egg. I really could go on and on. Hands down one of my favorites. On top of everything this map was only created in a little 2 month period. Really shows the skills that StevieWonder and Bluntstuffy have!

If you haven't played this map you are surely missing out